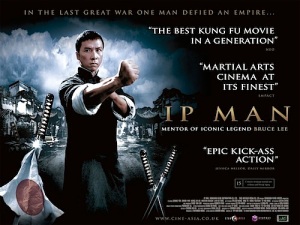 I liked Ip Man, but as we know from experience there are times when I find myself with little to say about a film, or I fail to make any notes, and this was an example of both. So I’ve decided to try something a little different.

I’ve read several different reviews of the film, found by various means, and have compiled a selection of quotes from them below. These are all segments of those reviews that I agree with or found to be an interesting point — I’m not trying to accurately represent each reviewer’s opinion, but instead using their words to enlighten my own. Each quote is, of course, credited and linked, so if you want to know their full opinion you can click through.

They’re arranged in an order that I think makes sense, too — by which I mean, rather than just bundle a selection of quotes in any old order, I’ve sorted them so that if you read them through as presented they should form a structured (more or less) piece.

Biographical martial arts drama starring Donnie Yen. China in the 1930s: Ip Man’s reputation as a martial arts master has brought fame and fortune to the city of Foshan. But hard times are ahead, as the Japanese invasion brings the once prosperous city to its knees.

Donnie Yen plays the eponymous Wing Chun master, who stove off hunger, poverty and half the Japanese army during China’s WW2 occupation – by kicking ass! 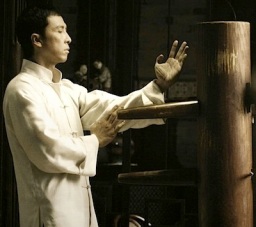 Though that’s an amusing thought, the film’s not quite that simplistic:

As he rallies his people to stand up for themselves, Ip Man becomes about how war pushes a peaceful man into action, but also how he tries to maintain his faith in what it means to be civilized.

There’s a pleasing playfulness about the opening scenes, which contrast… with the downbeat mood that follows during the occupation.

Not everyone was so impressed:

In transforming a humble real-life martial artist into the type of the reluctant hero (and nationalist icon), screenwriter Edmond Wong has turned his subject not only into something that he was not, but also into an overfamiliar kung fu movie cliche. This is an impression not helped by the film’s desaturated period look (yet another cliche), and a drift in the second, war-set half towards melodrama

a shameless hagiography that only bears a passing resemblance to history.

The presence of young Zhun [Ip Man’s son] suggests an eyewitness veracity to the events as portrayed on-screen — after all, Zhun himself, now a much older man and a wing chun master in his own right, served as a consultant on Ip Man. The film, however, does not hesitate to sacrifice the truth to the demands of dramatic entertainment. 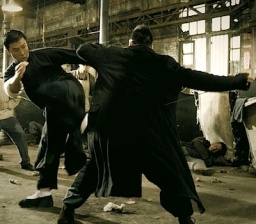 almost none of what you see in Ip Man actually happened, and in some sense that’s too bad, because the real Ip sounds like a fascinating figure. He was a pre-revolutionary police officer, a reported opium addict, and a refugee who fled the Communist takeover in 1949 for a new life in British Hong Kong. But all those factors make him undesirable as the hero of a work of rousing nationalist agitprop. So instead we get Yen’s remarkable performance as a man of prodigious Buddhist-Confucian composure and tranquility, who goes from wealth to poverty to near-slave status, and finally must fight a public gladiatorial match against a sinister Japanese general

True-to-life or not, action star Donnie Yen largely shines in the lead role:

Donnie Yen delivers a charismatic portrayal of Ip Man, the martial arts master of the title.

Man is the role Yen was made to play: a stoic tough guy that everybody in the community knows is the best

Yen’s performance is also a bit one-dimensional as the modest wing chun expert, but at least he gives a good account of himself in the finely composed and inventive close-combat scenes — an impressive highlight being when he wipes the floor with ten soldiers with methodical precision. 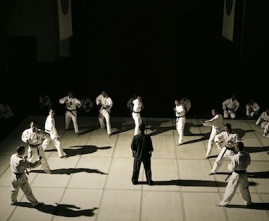 Indeed, fighting is still what the film does best:

As a showcase for the distinctive moves of Wing Chun, or more generally for some formalised (if largely wire-free) chopsocky, Ip Man is exemplary, thanks to the action choreography of cult Hong Kong star Sammo Hung.

Hung’s fight choreography is clever and exciting, with sequences that have Ip felling a sword-wielding rival with a feather-duster, or holding off two men with a 10-foot pole.

That final conflict between evil General Sanpo and Man — who of course still has to fight the biggest bad guy since the locals are too incompetent to even fight a group of disorganized bandits — is also curiously ruthless. Sanpo is likened to Man’s coat rack-like training apparatus, making the flurry of blows Man rains down on Sanpo’s head a vicious attack on a dehumanized piece of furniture. It’s a fittingly abstract and totally brutal finale.

There are definitely better kung-fu flicks in terms of pure action spectacle, but Ip Man delivers as tremendous entertainment even if you don’t much care about martial arts.

It’s not all rosy:

The film was a box office hit in China… That may have had less to do with the excellent fight sequences, directed by Sammo Hung with the help of one of Mr. Ip’s sons, than with the appeals to nationalism and, particularly, the heavy-handed depiction of the occupying Japanese as giggling sadists or implacable killing machines.

The Japanese themselves couldn’t be more stereotyped in their presentation, with the honourable-but-brutal general and his cackling, sadistic henchman 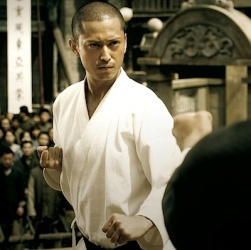 On the other hand, as that “sinister Japanese general”:

To revisit Film4’s point about the “desaturated period look (yet another cliche)”:

Yip’s aesthetics are more muted and traditional than those of well-known florid imports Hero and Crouching Tiger, Hidden Dragon. Yet such modesty is in tune with his soft-spoken protagonist, and also provides clean, sharp views of Yen’s awe-inspiring skills

a throwback to those chopsocky Hong Kong films of the 1970s – a period piece filmed on obvious but eye-pleasing studio sets with wall-to-wall kung fu and a simplistic, philosophical message.

I’m not qualified to judge whether [Ip Man] belongs among the top martial-arts films ever made, an opinion that’s been gaining credence as the movie bounced around the world… But there can be no doubt that director Wilson Yip has crafted a gripping, rousing, beautifully structured yarn, built around a calm but charismatic star performance by Donnie Yen and magnificent action sequences choreographed by the legendary Sammo Hung.

Consulted sources (including some unquoted)