Remember when M. Night Shyamalan was the wunderkind of Hollywood? Seems so long ago, doesn’t it? But clearly someone somewhere is still invested in him — or he’s managed to limp on well enough that stuff he works on seems worth a punt — because a couple of years ago he was able to launch a series of films dubbed “The Night Chronicles”. I don’t remember the details and they’re not worth looking up, but as I recall the idea is they were a series of low-key/low-budget horror-thrillers conceived by Shyamalan (he has a Story and Producer credit here) but helmed by others. Devil is the first of these. I don’t recall a second turning up yet.

Funny thing is, this is better than anything Shyamalan has done in a long time. At least since Signs, and I quite liked The Village (except the final act) and Lady in the Water (need to rewatch that, because it seems everyone else hated it). Without meaning to ruin the first act (which does take a little while to reach the point; but it sets up all the characters, so it works), the story concerns a bunch of people stuck in an elevator, one of which is an evil supernatural force… but which?

I like these small-group-of-people-in-one-small-room thriller/horrors — see also the exceptional Cube and the very good Exam. This is a solid addition to the sub-genre — 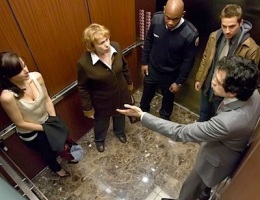 not the best, but with enough action, intrigue and twists to fill its (admittedly very brief) running time. It comes to a head with a pretty good twist/reveal. Again, it’s kind of ironic that it’s the best twist in a Shyamalan film for years, but it comes in a movie he neither wrote nor directed. Maybe he should take another look at the kind of films he’s choosing to make. (I say “maybe”…)

The film impressed on a couple of technical fronts. The main titles, for starters (pun intended): they play out over upside-down aerial shots of a city. Sounds like a silly idea, perhaps, but it actually feels Wrong and terribly unsettling. It’s a highly effective start to a horror movie. Then there’s exceptional creepy sound design whenever the elevator’s lights go out. The filmmakers don’t overdo it, with (say) screams or possessed voices or goodness knows what else, and that’s why it works: the fact it’s quite understated, that you can’t tell what’s happening from the sounds — it’s just breathing, rustling, bumping, that kind of thing — is what makes it all the more realistic and therefore creepier.

As an aside, in my occasional run of Comments Paying Too Much Attention To Certificates, it’s funny what Americans allow at what age rating. Here we have neck stabbing, hanging, creepy devil stuff… Seems a bit much for a PG-13, to me. The UK’s 15 is much more appropriate.

I wasn’t expecting a great deal from Devil. As a Shyamalan film it starts off with, if anything, a negative perception; and as one he didn’t even want to direct himself, you have to wonder how dreadful it’s going to turn out to be. But John Erick Dowdle (previously only responsible for the US remake of [REC] and a couple of things no one’s heard of) does a solid job, creating an effective little horror-thriller that delivers a fair number of chills and a decent serving of mystery. That’s more than can be said of Shyamalan’s work this decade.