Bad Day at Black Rock comes with an air of the forgotten classic — or, at least, it did to me. I think that’s important to how I ultimately reacted to it. As is that wherever I first heard about it pitched it as a suspenseful mystery with a twist. I forget where that was now, but I remember consciously avoiding finding out the plot’s developments (more so than one naturally would anyway) before viewing.

The latter seems to pay off, at first. Spencer Tracy stars as Macreedy, who arrives in a tiny, remote town in the American West, shortly after the end of World War II. He’s there with an unrevealed purpose; the locals are, for some reason, immensely suspicious of him. Starting here, the story is built on slow suspense and mystery: who is Komoko? What happened to him? How does Macreedy know? And what does Macreedy want? Sturges happily lets this mull and build over the best part of an hour, before suddenly darting past the reveals as if they’re unimportant. I’m not saying they need to be sign-posted with dramatic camera angles, weighty overacting and thudding “dun-dun-DUN!” music, but they’re shoved in here as if they’re immaterial; a bit of bookkeeping before the all-action climax. Perhaps these reveals weren’t meant to be so vital to the story as I had been expecting, but it still undermined my expectation.

The film also raises issues that, in my opinion, it fails to adequately explore. Primarily, the American attitude to the Japanese in the wake of Pearl Harbor, and also notions of complicity and complacency in the face of crime. There’s room for these threads to be explored and commented on, to be better exploited than they are. I don’t think it’s an issue of subtly (that is to say, that they are present, but without a heavy hand), more that they’re only fleetingly touched upon. Perhaps that’s unfair — I’m entirely upon to the suggestion that I was so busy focusing on the mysteries,

I missed the commentary. Indeed, in his piece at Riding the High Country, Colin notes that the issue of American reaction to the Japanese “is very obviously presented”. (He also examines the film’s representation of a third area, that of Bad Day… as a modern Western and by extension a commentary on “the nature of the west itself”, which as ever I heartily recommend.)

I’ve read that Spencer Tracy was reluctant to star (presumably because of the arguably-anti-American stance of the film), but he nonetheless gives an engaging Oscar-nominated performance, perfectly embodying the character’s odd mix of qualities. He’s authoritative yet acquiescent, disruptive yet quiet, placid yet can hold his own in a fight… In a film otherwise marked by its consciously single-note townsfolk, he makes an intriguing creation.

The most underused character by far is the only woman, Liz, played by Anne Francis, who is vital to the climax but barely has any screen time before that to make us care. Most of the other cast are served at least one scene which is ‘theirs’, in which we get to learn about their archetypal character and their piece in the town’s make-up and secretive past, but third-billed Francis is robbed any of that. Considering the film barely runs 80 minutes as it is, I can’t help but feel there was room to dig into her character a considerable amount more. 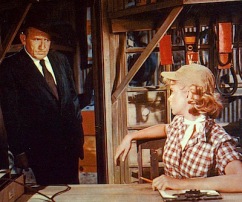 For a film so based in mystery and which has what I’d call a methodical pace (despite its short running time), there are surprisingly good action sequences to look out for: a car chase/battle along a thin path, a one-handed punch-up in a bar, and a climactic shoot-out that’s at its most tense once all the bullets have been fired. It’s not an action movie by any means, but these cinematic sequences stand out nonetheless.

I imagine I’ve come across as harsh on Bad Day at Black Rock. As noted, I’m not sure where I specifically heard it recommended — several sources, more than likely — but wherever it was made it sound like an under-appreciated minor classic, with a mysterious setup that specifically appealed to me. So perhaps that’s why I’m disappointed the mystery element wasn’t as foregrounded, and why I’m niggling at the ways it could have explored its own content better. At the very least, it leaves topics of consideration open for the audience to debate amongst themselves, and that’s never a bad thing.