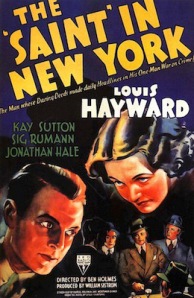 The Saint in New York is a B-movie in every sense of the term, but it’s certainly one of the fun kind.

There’s a crime wave in New York City. The police know which gangs are responsible but have been unable to successfully prosecute their leaders. So a bunch of people who are somehow involved in the policing of the city elect to call in elusive vigilante-type Simon Templar, aka the Saint, to sort it out for them. It’s the sort of premise you only get in pulp fiction and comic books, and these days the kind of thing that needs subverting or justifying (look how Batman of the ’60s (and even ’90s) works with the police, but is (officially) at odds with the law throughout Nolan’s trilogy)… and I love it. And despite what I just said, you could completely sell it today as a back-room conspiracy of powerful men — I’d love to see this film remade well (and I’ll return to that).

As the Saint, Louis Hayward makes for an appealing hero. He’s cocksure, and you could well argue (as Mike does in his spot-on review at Films on the Box) that he “seems to float through all the perilous situations in which he finds himself, as though he knows he’s the hero of the story and can never die”. Alternatively, he’s a James Bond character, so justifiably confident of his own abilities and plan that he has every right to believe he’ll be OK. (Indeed, this is certainly readable as a proto-Bond movie.) The downside either way is that there’s no sense of jeopardy or danger, which I suppose is a shortcoming; but instead there’s a kind of comic inevitability to the villains believing they could ever beat the Saint.

Screenwriters Charles Kaufman and Mortimer Offner also bestow him with a clever wit. There’s every possibility this results from how he’s portrayed in Leslie Charteris’ original stories, but I’m not familiar with them so couldn’t say; either way, Kaufman and Offner pull it off here too. Hayward wears it well, making a mischievously entertaining presence. 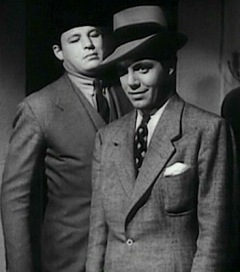 His habit of jumping into moving vehicles, much to the surprise of their drivers, is also fun. The other stand-out character is henchman Hymie, played by Paul Guilfoyle, who is enamoured of the Saint and constantly comments on his actions. Together they make the film a light, fun, amusing experience, with more memorable lines than a film of its stature deserves.

The plot is in many ways stock crime thriller filler, though I believe it has more potential than is realised here — again, I’d love to see a swisher remake. Hitchcock was apparently interested in helming it and I think there’s little doubt he would’ve made a better fist of it than Holmes, whose work is fine if workmanlike. So the story loses some of its impact because it’s under-explained, the final twist solid if guessable (at least by me) because it’s hurtled towards so quickly. The real weak link, though, is a ludicrously rushed romance between the Saint and gangster mol Fay (Kay Sutton). Apparently they fall in love during a 30-second visit to the zoo. Again, the potential joy of a remake: bulk that up and it’d fly well enough. Same with the main plot. Perhaps I should try reading the novel this is based on…

For all its flaws, The Saint in New York is a quick jolt of B-movie fun. Clearly it doesn’t rival the Rathbone Sherlock Holmes series (it’s obviously not as fondly remembered, and that’s usually for a reason), but admirers of pulp ’30s/’40s thrillers are likely to be as entertained as I was. Daft, but certainly fun. Hopefully the rest of the series can live up to (or better) the enjoyment I got from this one.

The Saint in New York is available on iPlayer until 31st July.