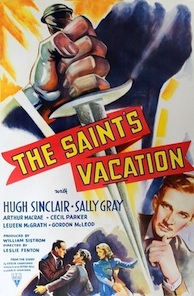 The Saint’s gone on vacation indeed — with the saintly George Sanders nabbed for RKO’s rip-off Falcon series, here we’re treated to fellow Brit Hugh Sinclair’s take on Leslie Charteris’ hero. For “treated” read “subjected”. I’ll come back to him, because sadly he’s not the only thing that makes The Saint’s Vacation the worst film in the entire series.

On paper it should have all gone fairly swimmingly too: not only is this film adapted from a Charteris story, it’s also the first to have the Saint’s creator co-pen the screenplay; plus the character has spiritually come home, as RKO moved filming to the UK to make use of funds frozen by the British government’s Cinematograph Films Act.** But none of that helps; indeed, perhaps it hindered, because the result is a mess.

The adventure is a runaround across Europe. I say “Europe” — it looked broadly Germanic to me, but there’s mention of Paris, and I read online it’s meant it to be Switzerland. Possibly it’s a combination of the above. Considering it’s technically set during the war (not that anyone explicitly mentions that), at least one of those is thoroughly implausible. Having praised the series for its palpable sense of location in earlier entries, that’s all gone here.

The plot itself barely hangs together. The Saint for no apparent reason decides to stick his oar in to someone else’s business, at which point everyone’s racing around the countryside after a mysterious little box that we have no idea why anyone wants. Things are compounded by the regular appearance of local police who will apparently believe whatever they’re told by the first person who tells them something. 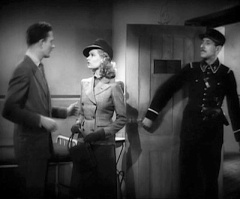 Apparently the villains are Nazis, though there’s absolutely nothing to suggest that here (again, that’s something I’ve since read online). The Saint knows both the villain and a Mysterious Woman of old, but it’s never explained how or why or what their relationships are. It’s like a set of stock adventure-story elements assembled without any understanding of how or why they should connect, which makes for an unsatisfying and unenthralling experience.

Matters are compounded by this apparently being a TV-friendly version created in retrospect. The title screen has a badly superimposed TV company credit stuck on it anyway, so I presume that’s why a fight scene halfway through has been butchered. It’s that or it was a complete hash job in the first place, with continuity-destroying jumpy editing and choppy music. It doesn’t even look especially violent, as you’d expect from ’40s filler, and it’s certainly no worse than other bits included later… but then of course I don’t know what was cut.

So we return to Hugh Sinclair, who is not a match for Sanders or The Saint in New York’s Louis Hayward. To be blunt, he’s as stiff as a board — pretty much literally, at least to begin with. Sanders oozed charisma just by appearing on screen; Sinclair doesn’t manage any throughout the entire film. 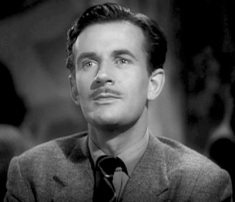 The rest of the cast don’t offer much compensation. Arthur Macrae as the Saint’s cowardly friend Monty is no replacement for the parade of ex-cons he formerly hired as manservants, while Sally Gray of The Saint in London (but here a different character) aims again for pluck but somehow isn’t gifted with the same quality of screenplay and/or direction. Cecil Parker is a solid villain, not that the screenplay treats him that well.

This is easily the worst entry in the series to date — and, having seen the final one before writing this, I’m prepared to say the worst overall. The series spluttered to an end after the next film over an argument between RKO and Charteris about the Falcon series, which was essentially a thinly-veiled Saint rip-off, but one wonders if it wouldn’t have tottered to its own end anyway.

Read more of my thoughts on Sinclair’s time as the Saint here.

* As with many of the Saint films, this has apparently not been passed by the BBFC since its release in 1941 (when it was also 20 minutes longer — that’s not just PAL speed-up!). Nonetheless, it’s available on DVD, rated PG. ^

** According to IMDb, The Saint’s Vacation “was the first film made using those frozen funds”. I’m no expert on this era, but the act I presume that bit of IMDb trivia means is the 1938 one discussed in the final paragraph of this section on Wikipedia, so presumably it was just the first RKO film to use that money. As I said, no expert — everything I know about this was gleaned from those two pages. Back to the review: ^