There are a few Oscar nominees from the ’00s that inspire little desire in me to bother seeing them (I’m certain that’s completely true of every era, but I’ve seen most of the ’00s nominees so I tend to focus on them more often), meaning it’s taking me a very long time to get round to them (maybe I never will). Master and Commander isn’t really one of those — it’s no Seabiscuit or In the Bedroom — but I can’t say a naval inaction film with Russell Crowe held massive appeal. Turns out I was completely wrong.

For starters, it’s definitely not an “inaction” movie. It’s not an action movie in the regularly understood sense of non-stop fights on varying scales, but there are a few stunningly realised naval battles, and other exciting sequences as the hero ship either tries to keep track of or elude their enemy. That’s essentially the film’s plot — one ship after another — and the long chase (they rarely have each other in direct sight) gives it an epic feel, as they chase an almost phantom ship, rather than engaging in regular heated battles.

There’s lots of good detail about what it would be like to live that life, woven in and around the plot. I’m sure this thoroughly thrilled maritime enthusiasts (assuming it’s all accurate), but for those of us whose interests lie elsewhere it still provides a vivid picture. It’s not so much a character picture, although the nature of Russell Crowe’s Captain is surely revealed in the way he goes about his tactics and the nature of his various relationships with various crewmen. Paul Bettany, as the ship’s doctor, is more our point of view: 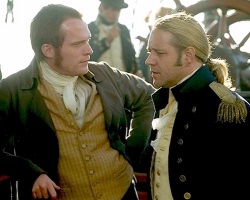 he’s not a naval man and doesn’t always understand their traditions. He’s not a crass audience-cipher in the way such parts often can be, but it does make him identifiable.

This is also the first movie ever to film on the Galapagos Islands, featuring it in an extended sequence in which Bettany — who also happens to be a keen amateur whatever-ist — ventures onto the island to collect specimens of the strange and unusual creatures they see as they sail past. Bettany would later play Darwin in 2009’s Creation, which lends this stuff some kind of odd intertextual significance in retrospect. While it’s an interesting aside from the story — an unusual kind of diversion — it is nonetheless an aside, and perhaps kills some of the momentum. On the other hand, along with some earlier sequences of trading with natives, it lends the film a feel of exploration, of an era when parts of the world — and the people and creatures that inhabited them — were still being discovered, even just by common sailors.

It looks like too many people felt as I did and didn’t turn out to see Master and Commander in big enough numbers: it opened at #2 in the US, grossing just $93.9m on a budget of $150m. It managed $212m total worldwide, but when you consider marketing costs… It was clearly considered quite a pricey proposition, considering it was, unusually, produced and/or released by 20th Century Fox, Universal and Miramax

(that makes for a strangely bizarre array of company logos at the start). Despite the fact it’s based on a series of 20 (completed) books, and various people involved have mentioned the possibility down the years, a sequel is so unlikely it seems silly calling it just “unlikely”. And that’s a shame, because this is an entertaining action-drama with likeable characters and an engrossing atmosphere. A little to my surprise, I loved it.

Master and Commander: The Far Side of the World placed 3rd on my list of The Ten Best Films I Saw For the First Time in 2012, which can be read in full here.