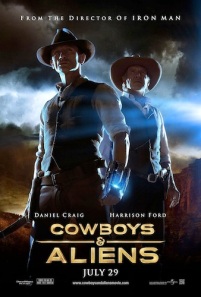 We all know the saying “too many cooks spoil the broth”, and it can’t help pop into one’s mind during the 85 seconds of company logos that kick off this genre mashup. Here the “cooks” are Paramount (serving non-US distribution only), Dreamworks, Universal and Imagine Entertainment — I can’t remember the last time I saw a Hollywood blockbuster begin with so many individual logo animations. It’s unsurprising that no one wanted to take a solo punt on a Western-with-a-twist after the failure of the last one anyone can remember, and after this (it barely reclaimed its production budget at the worldwide box office) it looks unlikely many will want to again.

Unlike that Will Smith vehicle, however, Cowboys & Aliens isn’t an appallingly bad film. It’s not a particularly great one, true, but its lack of success is due in part to someone agreeing to spend too much money on it — it made $175m and looks like a failure for Chrissake! Looked at objectively, that’s a pretty fine number, especially when its “Indiana Jones and James Bond fight aliens” selling point is tarnished by the recent films in both those franchises being poorly received.

But enough about money, what about the film itself. The story concerns Indiana Jones and James Bond fighting aliens. Sadly, not literally — it’s Harrison Ford and Daniel Craig as cowboys faced with an alien invasion. Sounds like pulpy fun, right? That’s what the title implies. Unfortunately, director Jon Favreau and the team of seven writers (that’s right, seven) decided it would be better to make it Serious. Ugh. Well, I say “ugh” — I’m not adverse to the idea of serious-minded renditions of initially-daft concepts; but not using the daft version of the concept as your final title might be a starting point. 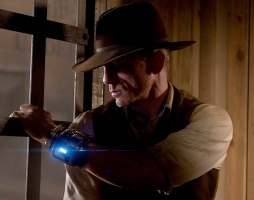 Thing is, what the film gives us doesn’t quite sit right, even if you’re expecting it to be non-pulpy. It’s still an action-adventure summer blockbuster, but with pretensions at times to be a Western drama. I think that’s the fundamental problem with the entire film, and probably why it feels slow, especially in the middle. A lot of that is character scenes, despite which the characters feel underdeveloped and under explored. One wonders if these particular writers, versed in the art of the blockbuster, don’t really know what they’re doing. Sometimes you can see what they were going for, for instance in how they set things up and pay them off (like the alien with a grudge against Craig), but somehow it doesn’t come off.

And the outcome is: maybe some of the pulpy thrills the name promised would’ve been better. It doesn’t need to be a comedy, it just needs to stop trying to be so grandiose and get on with the cowboys-fighting-aliens action. Which in this version, when it finally gets to it right at the end, is no fun because it’s too busy distracting us elsewhere — literally, the fight is a distraction for some of the other heroes to get on with the plot. Which I guess is why it feels so unsatisfying and you just want it to go away — we’ve nothing invested in that fight, other than it has to keep going on, and even that isn’t made clear (the aliens certainly aren’t desperate to get back inside their base, for instance). 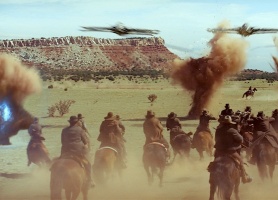 Also note that this climax lasts a full 25 minutes. It may not sound a lot for the big finish — it’s the whole third act after all — but it felt it (especially as the build-up begins 40 minutes out), with constantly shifting goal posts and Favreau’s attempts at making a skirmish feel like an epic battle. Other parts are just straight wasted opportunities, like the extended sequence in an upturned riverboat. For one thing, no effort is made to explain its presence. For another, it’s all so darkly shot that you can’t get a real sense of it. Could have made for some impressive sets — heck, maybe they were impressive sets — but it’s not well utilised. Makes it harder to work out just what’s going on at times too. Thank goodness it wasn’t in 3D!

Even without that gimmick, however, I really disliked some of the cinematography. Much of it is great, but then there are those dark bits, and even worse is some handheld psychedelically-graded stuff that just sticks out like a sore thumb. I can see what Favreau was going for, but it feels out of place, wrong, distractingly nasty rather than provocatively effective in a film that is mostly shot very classically, especially for a modern effects-packed blockbuster. 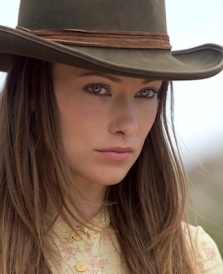 I could go on. For example, Craig loses the love of his life to the aliens, then loses the new woman he seems to have quickly fallen for to them too… but it’s OK because he saw a hummingbird at the end, so he’s happy. Or there’s the fact that the town is called Absolution — I believe, anyway, because I think one of the three guys at the beginning mentions it and it’s the title of a featurette on the BD. Other than that, no mention is made in the film, despite it arguably being one of the key themes. We don’t need to be battered around the head with symbolism, but a bit more effort might’ve been nice.

Remember when I said the film wasn’t bad? Honestly, it… well, it wasn’t really. There are good bits. British composer Harry Gregson-Williams offers a likeable score, especially the main theme (which plays over the DVD & BD menu, if you want to hear it quickly). It’s nicely evocative of familiar Western music while giving it a modern style too, at times sweeping when we reach an appropriate bit. One of the best elements of the film, in many ways.

As you may have noticed, I watched the Blu-ray’s extended cut of the film, which in this instance offers somewhere in the region of 17 minutes of new material. (Normally that website is reliable, but this isn’t their best guide in my opinion.) That’s quite a chunk of time, which makes me wonder if some of the pacing issues — the slow middle, as I mentioned — may be down to this being extended. Still, despite their relatively large total length, the extensions mostly come in tiny bits. Some I guessed (all the stuff with them exploring the boat), some it’s hard to imagine the film without (an early scene with Craig and the town priest, or stuff about the doctor and the kid coming along on the hunt — the doc they could’ve got away with, but the kid? Did no one watching the theatrical version question why they took him along?) Conversely, some of the extensions seem borderline unnecessary — 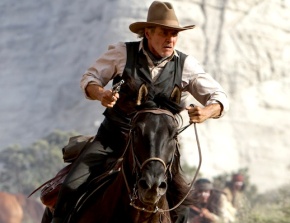 so maybe the theatrical version wouldn’t be much better pacing-wise after all. On balance this feels like an extended cut where someone decided to save a work-in-progress edit and later deem it an “extended cut”, then kept trimming to craft a more streamlined theatrical cut, as opposed to the filmmakers dropping missed elements back in post-release.

For an ending, I’m actually going to cheat a little and turn to another review. Naughty me. But Blu-ray.com’s coverage of the US disc has a good section that I may as well just quote in (almost) full as paraphrase as a source, and it goes on to a conclusion I simply agree with. So:

President of Universal Studios Ron Meyers’ brutally blunt assessment of [Cowboys & Aliens]? “Wasn’t good enough. Forget all the smart people involved in it, it wasn’t good enough. All those little creatures bouncing around were crappy. I think it was a mediocre movie. We misfired. We were wrong. We did it badly, and I think we’re all guilty of it. I have to take first responsibility because I’m part of it, but we all did a mediocre job and we paid the price for it. It happens. They’re talented people. Certainly you couldn’t have more talented people involved in Cowboys & Aliens, but it took, you know, ten smart and talented people to come up with a mediocre movie.”

Such honesty is rare indeed. As Blu-ray.com’s reviewer Kenneth Brown goes on to say,

you have to admire a studio exec willing to address criticism head on and take responsibility for projects that should have taken off but, for one reason or another, crashed and burned. So is Cowboys & Aliens really that bad? “Mediocre” is fair, “disappointing” even more so. It isn’t a bad flick — it’s actually kinda fun, if you’re willing to abandon high expectations and switch off your brain for two hours — it just isn’t nearly as good as it could have and should have been. 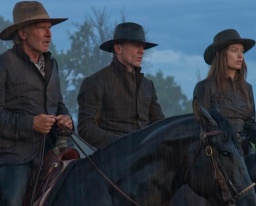 And I’m sure that, in its wake, Disney haven’t made a mistake by spending a reported $250m ($87m more than Cowboys & Aliens cost; $75m more than it earned) on Western-with-a-twist The Lone Ranger, have they?

This review is part of the 100 Films Advent Calendar 2012. Read more here.