With the important awards finally arriving (the BAFTAs this Sunday, the Oscars in a fortnight), last year’s winner is on Sky Movies Premiere from today. What better time to review it? 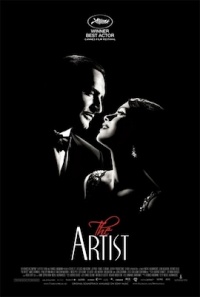 Beginning in 1927, you could (and some have) accuse The Artist of being a remake of Singin’ in the Rain, only swapping the milieu of the musical for that of the silent film — both equally alien to modern audiences! The story concerns a silent movie star, one of the biggest names in the business, who is ousted when sound arrives and the public want new faces. Concurrently, an ordinary girl he bumped into (literally) at a premiere rises to become one of the new era’s biggest names.

I remember hearing about The Artist when it debuted at Cannes in 2011. It garnered some acclaim and sounded interesting, especially to someone who’s interested in both silent film and modern versions thereof. But I also got the impression it was seen as a curio, no more than a film fan’s film, and so hoped it would somehow make it over here eventually and I’d one day get a chance to see it. Things turned out a little differently, of course.

Some have said The Artist is over-praised and not a patch on any of the real silent films it seeks to emulate. I take umbrage with that. While it may not be to the level of the very best the silent era has to offer, in that case you’re comparing it to the crème de la crème of some 30 years of cinema; a time of invention and innovation to boot. They churned ’em out in those days, and I’d wager The Artist is more than equal to the period’s average output.

Besides which, it isn’t a real silent film, and not just because it uses sound on one or two occasions, to very specific effect. Made 80 years after the invention of sound revolutionised cinema over night, The Artist is a tribute and homage to that great era — it’s not trying to beat them at their own game. It’s certainly not the first ‘modern silent’ either, but it’s an appropriate one to have received the most widespread attention (La Antena was a bit weird and The Call of Cthulhu a bit niche, for two other recent efforts). I think the general public still think of silent cinema as either a mustachioed villain tying a damsel to the tracks, people walking at double-fast pace, or slapstick comedy, so it can only be a good thing that The Artist gained such wide acclaim and introduced more people to a fairer understanding of the films of the time.

The film itself has much to admire, although it’s hard to put aside that its greatest impact is as a silent movie made in the 21st century. The black-and-white cinematography is frequently gorgeous, the 4:3 frame always precisely composed. LA’s Bradbury Building (now restored, but most familiar to film fans as one of the rundown locations for Blade Runner) lends its particular style to one memorable sequence: the long shots reveal staircases and floors so symmetrically squared

Director Michel Hazanavicius litters the film with subtle but clear markers such as this — the man and woman statues that move further apart on the sideboard as George and his wife grow distant; a marquee advertising Lonely Star as George slopes away from an auction of all his possessions; and so on. It may not be taxing to spot such allusions — I’m sure a hardened cinéphile would bristle at the very notion such visible signs could be considered symbolism at all — but they’re still neat.

As George, Jean Dujardin exudes all the requisite charm of a silent movie idol, while later silently conveying his sliding confidence and sink into depression. Bérénice Bejo is equally charming as kind-hearted Peppy, while James Cromwell offers able support as a loyal chauffeur.

There’s no denying the real star of the film, though. Winner of the Palm Dog and a fixture of the red carpet this time last year, Uggie steals every scene he’s in. Whether he’s doing a trick (his party piece, pretending to be shot, makes a neat throughline to a tension-breaking pay-off)

or just faithfully following George around, he draws your attention. I might think that was just me (we’ve been over my love of terriers before), but his near-constant presence during last year’s awards suggests otherwise. And boy can he run!

Sometimes acclaimed films suffer when divorced from awards season hype. Some people have certainly felt this way about The Artist. Personally, I think they do it a disservice. As a tribute to silent cinema, made in a flawless imitation of the style, it’s marvellous. As a romantic comedy, it’s sweet and funny with an occasional dramatic edge (more than you might expect from all the cheery trailers and clips). Much like its stars — all three of them — I found it charming.

The Artist is on Sky Movies Premiere twice daily until Thursday 14th February. The British Academy Film Awards 2013 are on BBC One at 9pm on Sunday 10th February.