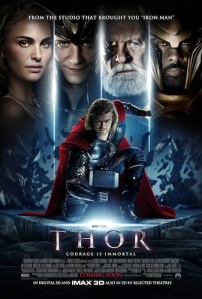 Director Kenneth Branagh brings all his Shakespearean know-how to one of the most innately successful of Marvel’s recent superhero movies. Perhaps lacking the mass appeal of Iron Man (specifically, of Downey Jr), Branagh spins a yarn of gods and mortals, humility and responsibility, without stinting on action or humour.

In the title role, Chris Hemsworth is an instant star; as his evil brother, Tom Hiddleston also seems to be commencing a considerable career. Too much building to The Avengers is its only major flaw. I had no interest in Thor before; now I’m desperate to read some of the comics.

In the interests of completing my backlog of 2012 reviews, I decided to post some ‘drabble reviews’ of the stuff I watched longest ago. In the future I may update with something longer, but if I don’t, at least there’s something here for posterity.

For those unfamiliar with the concept, a drabble is a complete piece of writing exactly 100 words long.

My reviews of the other Marvel Phase One movies can be found at the following links: Iron Man, The Incredible Hulk, Iron Man 2, and Captain America: The First Avenger; plus, the first two Marvel One-Shot shorts.