Originally created for the film’s US TV premiere in May 2004, then later released on the film’s Ultimate Edition in 2009 (and not making it to the UK in HD until the Wizard’s Collection last September), this Extended Version of the first Harry Potter film adds six-and-a-half minutes of new bits and bobs to the already lengthy adaptation.

Having not seen Philosopher’s Stone for something approaching a decade, I wasn’t sure I’d be able to spot what had been added, especially when the new inclusions were so small. And, indeed, I couldn’t — but the film all seemed so very familiar. As it turns out, there’s a very easy way to find out what’s new, as well as explain why it didn’t jump out at me: look in the disc’s deleted scenes section.

Included on the film’s original DVD release back in 2002, albeit under a series of frustrating mini-games, were six short deleted sequences and one extended one. I owned that DVD, and I found and watched those scenes… and it’s those and those alone that were added back into the film in 2004. I suppose that’s unsurprising really — they were fully mastered, and presumably if there’d been any more (or any more Chris Columbus was prepared for viewers to see) they would’ve been included on the DVD too. (If you own the US Ultimate Edition or any version of the Wizard’s Collection, the scenes can now be found in HD on the special features Blu-ray.)

So what’s new? A couple of snippets of the Dursleys, a bit with Harry and Hagrid on the way to Diagon Alley, an extended scene in Snape’s first class, an extra beat with the three leads after they defeat the troll in the bathroom, an introspective moment at Christmas, and a fuller version of the kids finally discovering who Nicholas Flamel is.

(See all of that with pictures here.) Are any of these of great consequence? Not really. I presume the first three were cut to get to Hogwarts that bit quicker, while the classroom scene displays a petulance from Harry that isn’t entirely in keeping with how he’s been presented to that point. The others were, I suppose, sacrifices for time and pace, though as they’re so short in such a long film, they hardly make a mark.

As for the film itself, it holds up surprisingly well after 12 years and seven increasingly-dark follow-ups. The child actors aren’t that bad, all things considered; the adult cast are a constant delight; the CGI looks surprisingly good (some digital stunt doubles notwithstanding); John Seale’s cinematography looks gorgeously film-like on Blu-ray (especially when you take a look in some of the documentaries that merrily mix clips from all the films — Half-Blood Prince in particular looks like a horrendous mess of OTT digital post-production).

At the time Philosopher’s Stone received criticism for journeyman directing from Columbus and a too-faithful adaptation of Rowling’s novel. Ironically, one of the top threads on IMDb’s forum for the film now complains that it’s not faithful enough. The truth is closer to the former than the latter, but that doesn’t make it a bad film. True, it may struggle to convert those new to the world of Potter, and perhaps a Lord of the Rings-style brisk theatrical version followed by a more extensive and faithful Extended Edition would’ve been the way to go… but whereas every film of any quality can get such treatment these days, 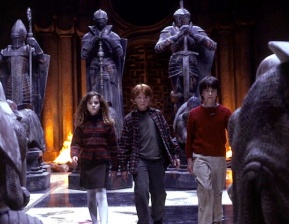 that wasn’t common practice back at the turn of the millennium (unless your name was Ridley Scott), so the filmmakers can’t be blamed for not doing it. As it stands, I think they mostly struck a fair balance between fidelity and the fact it’s an adaptation. Similarly, Columbus’ direction is rarely exemplary, but it’s competent with some memorable moments.

Even if the Extended Version makes little difference (even for fans it couldn’t be described as essential), I still enjoyed revisiting Philosopher’s Stone. It marks the beginning of an attempt to re-watch the entire saga over eight consecutive weeks, which will hopefully be both fun and interesting — already, I’m spotting links and connections to later events that wouldn’t have been apparent when first viewing the film. Harry Potter isn’t everyone’s cup of tea, but I think they’re an entertaining, well-put-together series of fantasy adventures. Plus, as child-driven worldwide media phenomena of the 21st Century go, it’s the only one I can think of that isn’t offensively awful.

Tomorrow, I open the Chamber of Secrets…