“Hype” has to be one of the biggest factors in how we view films these days. Technically it’s defined as “extravagant or intensive publicity”, I suppose thereby meaning something to “positive expectation”, but I think it also works the other way: if you’ve heard nothing but awful things about a film, its weakness has been ‘hyped’. It’s this latter point that applies to Green Lantern, which has an almost insurmountable degree of negative expectation attached. To summarise the headline points, it’s got a woeful rating of 26% on Rotten Tomatoes and took just $220m at the international box office, which might sound a lot but barely covers its production budget. So I expected to despise Green Lantern, or at least roll my eyes or twiddle my thumbs at its constant awfulness, but I actually quite enjoyed it.

And that’s why I talk about hype, because my expectation that the film would be irredeemably awful is at least partly why I found it surprisingly enjoyable — a bit like XMO Wolverine, which I didn’t like nearly as much when I watched it again a few years later. I’m not going to try to argue Green Lantern is a great movie, or even that it doesn’t contain significant flaws, but as a comic book-y two-hour diversion, I found it passably entertaining.

For those not in the know, the plot concerns Hal Jordan (Reynolds) finding a dead alien and a ‘magic’ ring that inducts him into a sort of intergalactic police force, the Green Lanterns. Stupid name and concept, attributable to it being a genuine magic thing before being reinvented as alien tech at some point, and perhaps it was the very daft datedness of the idea that (in part) put a mass audience off. 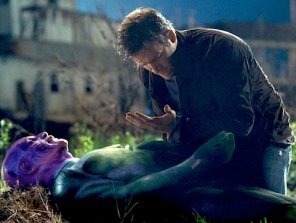 But I digress. Cocky jocky Hal is whisked off to the other side of the galaxy to learn how to be a Hero and use his ‘magic’ ring, which can conjure stuff up, then returns to Earth to save it from some menace(s). As superhero origin stories go, at least it’s got a couple of differences.

Hal’s character arc — the cocky guy who’s actually got fears and insecurities due to the death of his father — is actually quite a good one; a neat twist on the usual hero archetypes. So many superheroes have a version of the “loved one died when I was young” thing, but for most it’s motivation to fight rather than a worry that holds them back. But that arc is underplayed almost to the point of being unnoticeable, so when Hal overcomes it in order to save the day, you barely register that he’s overcome anything. Which is a shame, because there was potential in that. You don’t necessarily expect depth of character from a blockbuster, but it does hold it back.

However, the film’s primary problem (at least for me) was a lack of threat; or, rather, a lack of urgency. There’s a great big devourer of worlds out there, but we never get the feeling it’s doing much harm to anyone. I mean, it is, but we don’t feel it. Even at the climax, when it sets course to Earth, it’s more of an understanding that our hero is going to save the planet, rather than a genuine sense of peril that Earth is under assault. Perhaps this stems back to characterisation: some of the cast are likeable enough; the others are bland enough to not be unlikeable; and that leaves us wanting for someone to root for. 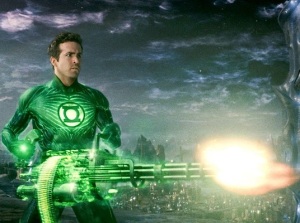 There are positives. The action sequences are good, which is a definite plus in this kind of film. The inventiveness with what the ring can do is fun. There’s a lack of relation to the sketchily-drawn characters that stands in the way of us truly engaging with them, and there’s a certain brevity and lack of scale that undersells the alleged threat to Earth (it’s a giant evil space-cloud that can barely cover a few city blocks, let alone the entire planet) — but, that aside, they’re entertaining enough. That said, much as the film pulls its punches with characterisation and threat, so it does with awe and spectacle. The Lanterns’ planet Oa doesn’t have the same impact as Asgard in Thor, yet we’re told several times what a spectacular place it is.

The Blu-ray’s Extended Cut adds exactly 9 minutes and 39 seconds of new content (as ever, details can be found here). This is almost entirely a prelude sequence, showing the death of Hal Jordan’s dad. The sequence serves to flesh out the relationships between Hal, love interest Carol and future-villain Hector a little, but there’s not a lot gained that isn’t learnt elsewhere. It also breaks up the flow. I only watched the extended version in full, but I imagine it’s a smoother transition in the theatrical, rather than pinging back and forth between intergalactic goings-on and bits & bobs on Earth. The only other extension comes when Hal has a chat with his 11-year-old nephew. Conversely, this scene plays much better in the extended cut, and I’m not entirely sure why they felt the need to cut it.

Indeed, I’d say the Extended Cut doesn’t go far enough, with some of the disc’s deleted scenes meriting inclusion. However, the main one occurs on Oa, meaning an effects-heavy scene that hasn’t had CG work done or all the voices recorded, so couldn’t just be dropped back into the finished film as-is. I imagine that’s why it wasn’t. That said, even if they’d done such work, those scenes are minor points, not game-changers.

What an extended cut of Green Lantern should really have done is build character and emotional impact. The plot is decent enough, but the film rattles along and sticks purely to story — we never feel it. It is nice to have a blockbuster effects movie that comes in closer to two hours than three, but they used to be able to make those and have us care. Where’s that ability gone? The only relationship that gets any real screen time is the romantic one, and that’s a damp squib.

I quite enjoyed Green Lantern while watching it. I felt quite positive afterwards. But the more you think about it, the more you spot the lack of depth. Maybe that’s OK — maybe it’s fine for a film to just give passing pleasure while it’s on. It wouldn’t be good if every film operated at that level, but it’s a painless experience now and then. 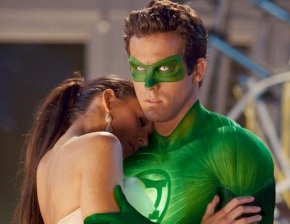 Still, I think there’s a better film lurking in Green Lantern, and it’s a shame it didn’t get the screenwriter(s) or director(s) required to bring it out. It’s even more of a shame that worse films than this have received a kinder critical consensus or huge box office. That leaves some suit feeling vindicated and churning out the same rubbish again, whereas with a bit more effort Green Lantern 2 could’ve been worthwhile.