2001’s car racing actioner The Fast and the Furious seemed, to me, to meet with a mixed reception; the kind of thing where some critics disliked it and some enjoyed it for what it was, and audiences were more the latter but only passingly so. It must’ve done well though, because in 2003 we were treated to a sequel.

For 2 Fast 2 Furious the studio backed the wrong horse, signing up the first film’s uninteresting hero, Paul Walker, and leaving its more entertaining villain, Vin Diesel, to his skyrocketing action star career. The main talking point seemed to be the title, out of which the piss was relentlessly taken… and has been ever since.

Come 2006, there seemed to be some kind of last-ditch attempt at saving what someone thought was a good idea. The third film in the series ditches a number for a subtitle; ditches the US settings for Japan; and ditches every character from the earlier films in favour of a fresh start. What remains is the tone and the content. The plot is the usual mix of street racing and gangster posturing, though at least the “woohoo hot chicks!” and rap culture business has been toned down from last time.

The plot, such as it is, sees a rebellious US high school student (target audience cypher, check!) sent away to his father in Japan instead of going to prison (I’m sure there’s some logic there…) and ordered never to go near a car again. Which he promptly does, of course. Racing is different in Japan, though: rather than drag-style muscle with the odd inconvenient corner, here it’s all about drifting — sliding round corners with style. Goaded into a race, said high school student (I can’t remember his name. Who could?) loses miserably. And then he sets out to learn how to drift and there’s some stuff with a girl who’s with the bad guy and there’s some gangster-types and you know the drill, I’m sure. 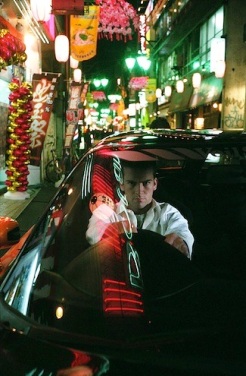 If I sound dismissive, it’s slightly affected: Tokyo Drift is surprisingly decent. Surprisingly decent for a Fast and Furious film, that is. In my review of 2F2F I described it as “junk food” — you know it’s bad for you, but sometimes it hits the spot. Tokyo Drift is the same kind of film, all fat and sugar and no substance, but kinda tasty at the right time. And at least it provides something different to the previous films. Not so much the new characters, who are predictably bland; or the plot, which is samey; but the move to Tokyo, which lends proceedings a different flavour and style, not least the emphasis on drifting — most/all of which was performed for real by stunt drivers, rather than the often computer-enhanced car action of the previous films.

Despite this looking like a desperate grab that would leave The Fast and the Furious series as a trilogy in technicalities only, somehow the franchise has since revitalised itself. More on that next time, but it does have a bearing here: as later films brought returning characters and on-going plots, so Tokyo Drift slipped away as an anomaly; an aside, perhaps even a mistake, that has no place in the series’ primary narrative. While that last point may or may not be true, as a film in itself, Tokyo Drift is as passingly entertaining as anything else the F&F series has yet offered me.

* The original aspect ratio is 2.35:1, but this was on ITV and they’re less respectful than Channel 4 or (sometimes) the Beeb. The cropping was rarely noticeable, however. ^