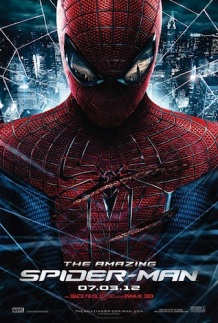 Andrew Garfield dons the webbed onesie for an unwarranted reboot of the only-one-decade-old Spider-Man film franchise, retelling his origins… but with a twist! Cos, y’know, the last version was only out about 10 minutes ago.

Director Marc Webb’s only previous feature credit is hipster rom-com (500) Days of Summer. Presumably he was chosen, not for his surname, but because half of Amazing is a hipster rom-com. Peter Parker is no longer a socially inept geek, but a mumbling hipster who easily attracts the attention of his longed-for girl (and maybe one or two others) because he’s hipster-cool.

This is just the first of many mistakes. There’s the ditching of the famous “with great power” motto, just Because; and he does grow webbing naturally, as per the controversial decision in the Sam Raimi-helmed trilogy, but now he develops artificial wrist-based web-shooters too, because That’s In The Comic Goddammit; and then there’s some kind of conspiracy backstory with his parents because That’d Be Different.

Essentially, everything is geared towards making sure this isn’t just a rehash of the previous series-starting film, because, as we established, that only happened just a minute ago. In the process, various bits get bungled, rejigged and rearranged to try and convince viewers that you haven’t seen all of this origin story before, when really you have… and done better, too.

The film isn’t without merit. Some of the done-for-real web-swinging is nice; Garfield is good when not affectedly stuttering; love interest Emma Stone is pretty until she opens her mouth; 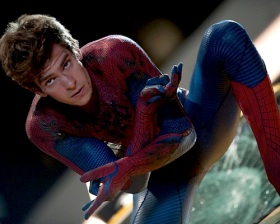 some of the action sequences are alright. Mercifully, the much-trailed first-person segments are cut down to a minimum; kind of a “we made this so we ought to use it, but we’ve realised everyone was going to hate it”.

But supporting characters get short shrift. Denis Leary doesn’t turn up until halfway through and gets a half-arsed arc that jumps from one end to the other. Rhys Ifans gets off to a good start as sympathetic villain-to-be Dr. Curt Connors, but then his story too is jumped forward when someone clearly realised the running time was running away from them.

Spider-Man’s mask seems to come off every 10 seconds. Attempts at “aren’t New Yorkers all wonderful” patriotism come off as cheesy and literally laughable (the aligned cranes!), whereas in Raimi’s films they kinda felt good even though you knew you should find them horrid. Gone is the humour or colourfulness of those previous films. I know the latter wasn’t to everyone’s taste, but it nailed the intended tone of Spidey much better than this Nolan-inspired grim real-world style.

Someone mentioned Twilight in the run up to release. Disappointingly, they seem to have taken this to heart, focusing on the romance at least as much as the superhero antics. I don’t know how they divide up in terms of screen time, but it feels like the romance received more time and effort from the makers. 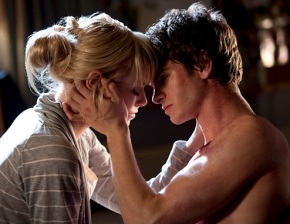 Not that it pays off — instead it just feels like the action scenes were bunged together because, hey, some of the fans want that stuff, right?

Plus, remember how everyone disliked Spider-Man 3 so it did less box office than either of its predecessors? This did even less again. While I’d like to say they’ve listened to fans for the sequel, I think it’s superficial: the suit’s had a major redesign to make it look even more like the comics than either previous version (bigger whiter eyes!), but it will feature at least two, probably three, and possibly four major villains. Such multiplicity was 3’s undoing, and as Webb & co couldn’t find the room to do even one villain properly in this film, I dread to think how they’ll handle several.

The Amazing Spider-Man isn’t a disaster — I’ve given it three stars for a reason — but Raimi got it right in his first two films, and by being different for the sake of it they’ve thrown away a lot of what worked and emphasised many of the things that didn’t. I’m sure there are plenty of single adjectives people would use to describe this iteration of Spider-Man, but “amazing” isn’t one of them.