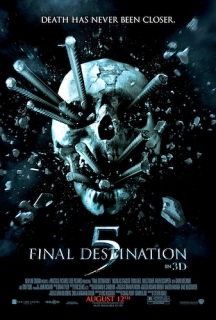 Here, the focus switches from the schoolkids of previous films to a workplace… staffed by people who look like they should still be in school. I don’t think that’s because I’m getting old, but probably because US productions have a habit of casting twentysomethings as highschoolers and I guess these are twentysomethings playing twentysomethings. It doesn’t really make much difference, anyway — they’re still all involved in an incident, they’re still not friendly enough to be hanging out together all the time, they still get bumped off one by one.

Oddly, this feels fresher than the dire fourth film. Not much, perhaps, but it has a few more twists on the formula. That said, it’s generally a very tired format now — the identikit plot is merely a delivery medium for more varied deaths. There are some creative ones here, for thems that likes that, but it feels horrendously shallow and exploitative. Of course, some people do like that (there wouldn’t be an “exploitation” genre otherwise), and I guess it satisfies them on some level.

In the positives column, Tony Todd is back from the first two as the enigmatic coroner. As well as no doubt pleasing the series’ fans, his appearance makes it seem like there’s been some attempt to further the franchise by re-introducing his brand of mystery. A Surprise Twist in the closing moments (about when and where the story’s events occur) seems to do similar, 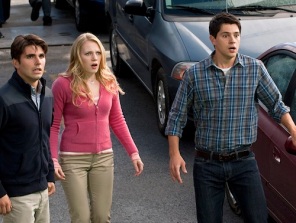 although on reflection it’s meaningless; a clever nod that isn’t really clever, but is neat. And perhaps means the series is finally going to rest.

In other news, this is the second one in 3D. I’d forgotten that, but it becomes obvious pretty quickly — there’s all the usual stuff-at-the-camera nonsense. It’s part of the fun of trashy horror films in 3D, so in that respect I don’t mind it. But in 2D, it is kinda distracting. I think this is a film that was made to be watched on the big screen in 3D once and then forgotten about.

Some long-running movie series manage to cement their reputation as the films stack up — look at Bond. Others don’t exactly improve, but attempt fresh offerings or develop in some way — look at Saw. And others slide further and further into mediocrity — and Final Destination is now a go-to example of that. The first two are pretty great, in their own way, but none of the others are really worth bothering with — and, as you can tell from the number, this is one of the others.