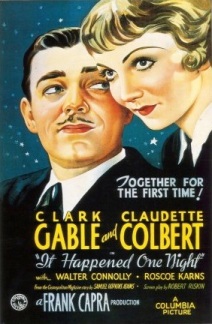 It Happened One Night was the first film to win the Oscar “grand slam” (Best Picture, Actor, Actress, Director, Screenplay), and is still one of the few to have won everything it was nominated for (alongside The Last Emperor and Return of the King), yet everyone involved seemed to think it would be a disaster: several people turned it down (five actresses); Claudette Colbert only agreed because she got double her salary and would be done in four weeks (and didn’t bother to attend the Oscars — when she won, she was rushed to the ceremony to make her speech); on the first day Clark Gable declared “Let’s get this over with”; and so on. So is it a multi-Oscar-worthy triumph, or the mistake so many cast and crew thought it to be?

Firstly, it’s the archetypal rom-com: two mismatched people are forced together, initially hate each other, fall in love. I don’t know if it was such a well-known set of events back then, but today it’s a formula we’ve seen repeated a thousand times in cinema. Despite that, its execution here feels fresh. Partly it’s the way the narrative cunningly draws the stars closer and closer together: losing suitcases, switching modes of transport, running out of cash… Partly, it’s the ineffable charm of a well-written, well-performed story. Gable and Colbert light up the screen like true stars. Their chemistry is immense, and though both characters could be intensely dislikable, instead they’re captivating.

It’s often credited as the first screwball comedy, and there is an element of that, though it’s no His Girl Friday in this regard. Still, numerous sequences work really well comically, like the motel argument (a particular stand-out). 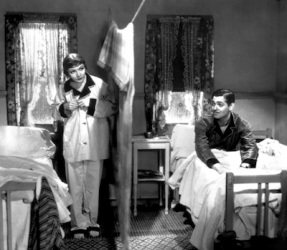 The Walls of Jericho running motif is also nicely executed, leading to perhaps the sauciest final scene not to feature a single shot of human beings that I can think of.

Fortunately, It Happened One Night‘s successes are nearer the truth than the opinions of those who made it. Even 80 years on, this stands up firmly as a gloriously entertaining film.