There are few things as weird (or, at least, weird in quite the same way) as watching an acclaimed and beloved classic film and… just not getting it. Here’s a paragon of moviemaking; a film that is not only exalted but, crucially, has remained in people’s affections against the forces of age; a thing that has truly stood the test of time… and yet… meh.

As you might have guessed, Dr. Strangelove was such a film for me. It’s not that I thought it was bad, it just didn’t click. I was expecting a comedy, but it took a good 20 to 30 minutes to get going humour-wise. Not sure there are any laughs in that period. Maybe one. After that it was funny in parts, but intermittently and unpredictably. Most of the best bits are quite subtle, though occasionally it explodes into a style that’s quite broad, especially the titular doctor and his final speech. I’m sure this is sacrilege, but I felt like it needed 15 to 20 minutes (or more) cutting out just to get on with things.

At times I wondered if the film might just want to be a straight thriller, but that Kubrick couldn’t escape what he saw as the inherent ludicrousness of the situation. Even if you wanted to try reading the film from that angle, the silly bits are too silly to take the rest seriously. I can’t help but feel this plot was better executed when it was called Fail-Safe. (Though, confession: I’ve not seen that. But I have seen this, and I preferred it.)

On the bright side, it’s beautifully shot, especially anything in the War Room or Ripper’s office, so it looks great on Blu-ray. There’s also sets by Ken Adam, which aren’t as outlandish as his famous Bond work but can be equally as striking, especially (again) the famous War Room. 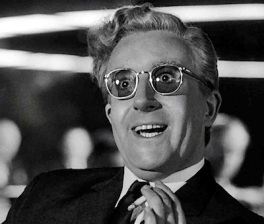 In the end, I felt like I just didn’t get it. Not that I was watching something bad and I couldn’t fathom why so many people loved it, but that I just didn’t understand what it was I was meant to be seeing. Which is perhaps the same thing. I mean, I can see Kubrick was making an anti-war point at least as much as he was trying to make people laugh, but what do turgid sequences of people reading out numbers and flicking switches contribute to either of those aims? Perhaps the joke is meant to be in how long it goes on for? Like Family Guy. Has anyone ever said Dr. Strangelove and Family Guy are alike before, I wonder? Except I laugh more regularly during Family Guy.

Dr. Strangelove was viewed as part of my What Do You Mean You Haven’t Seen…? 12 for 2013 project, which you can read more about here.