The Walking Dead, Warm Bodies, World War Z… zombies seem to be everywhere at the minute (generally in things beginning with ‘W’, for some reason), and generating big business. But this particular subgenre began 45 years ago, in a simple black & white independent movie, made for less than 1% of Brad Pitt’s salary for World War Z.

In a remote deserted cemetery, a twentysomething brother and sister bicker as they lay a wreath on their father’s grave. In the distance, unnoticed, a man in a scruffy suit shambles towards them… A frantic escape leads to a deserted farmhouse, where a group of strangers hole up against an ever-growing number of encroaching undead cannibals…

These supernatural creatures — the dead brought back to life for reasons unknown (though at least one is posited) — are not once referred to as “zombies” in the film. Quite where that moniker comes from I’m not sure — previous zombie-related movies had concerned a more ‘accurate’ version, about “living people enslaved by a Voodoo witch doctor”. Here, the undead are referred to as “ghouls”, or simply “those things”. Quite why that term didn’t stick (the former, obv.), I don’t know.

But the name aside, this is clearly the source-work for the entire zombie subgenre. That said, in terms of the film itself (rather than just the menace it features), its influence is more obvious on horror/suspense cinema in general than zombie films in particular. This isn’t an action-adventure kind of horror with constant gory zombie battles, which is the main route the genre seems to take (perhaps more inspired by Romero’s sequels); rather, it’s a group of people doing their best to hide and wait out the threat. In that respect it’s almost more of a drama, with the characters spending more time in conflict about what their next move should be than battling the undead. The whole “group of strangers holed up in an enclosed space” is a subgenre that feels like it took off in the past 15 years or so

(see Cube, Exam, others that escape my memory), but Romero definitely prefigures all of that. Equally, you could look to ’60s Doctor Who and the birth of that series’ own “base under siege” subgenre, which has stylistic similarities but predates this. (Not that I’m saying Romero took ideas from contemporary British children’s television. Indeed, I think it’s fair to say he didn’t.)

Of similar familiarity, the characters are archetypes of the genre now, broadly speaking, but I imagine were less so at the time. De facto leader Ben is great, especially for the era: a strong, leading, commanding black character, whose race is never mentioned. He was written as an unintelligent white truck driver, but black actor Duane Jones gave the best audition and so won the role. An intelligent man himself, he changed the part quite radically, to a point where even contemporary reviews noted how unusual it was to see an otherwise-white cast led by a black character.

Elsewhere there’s examples of ‘The Coward’ and ‘The Young, Willing, But Ultimately Incapable One’. Ben aside, however, the most interesting characters are the women, mainly because plenty of reviews and commentary talk about how weak they are. Several of Night…’s numerous remakes have even explicitly addressed this, changing how they behave. I don’t hold with that, and I’d like to think as time moves on fewer people will. Much of this argument centres on Barbra, who after initial events shuts down and sits catatonic on a sofa for much of the film. The apparently-accepted point of view is that she’s useless and pathetic, and the film’s written that way because she’s a woman,

while the men are capable and get on with things. Poppycock. Barbra is clearly in shock and, even more so, traumatised. It’s a great performance by Judith O’Dea in that regard, thoroughly believable as to how someone with such damage to their mental health might behave. Far from being the weakest or most irritating character, I think she’s the most fascinating, especially when you add in her final reaction.

Of the other two women… OK, in fairness, ‘The Girlfriend’, Judy, messes things up royally. If that role were a man then he’d just be ‘The Idiotic Character’, but because it’s a woman it has to be read as a pathetic and weak characterisation. It’s not helped when seen alongside the inactive Barbra, of course. But perhaps we should remember that this was the 1960s — it’s a part that’s of its time, not only in the filmmakers’ attitudes but in how people would genuinely behave. Not that women couldn’t be strong or capable in the ’60s, but if you’re brought up thinking you’re a certain thing, some people are going to develop into that and no more. ‘The Mother’ is certainly better: she argues with her wannabe-controlling husband, disobeys his instructions, sides against him. Her fate, again, is not the weakness some paint it as, but a plausible reaction to the situation.

Watching Night… knowing that it was made by enthusiastic first-time filmmakers on a next-to-nothing budget makes for an interesting perspective. It starts out contained to a few rooms of a house with just a handful of actors — that makes sense, it’s cheap to do. But then the zombies ghouls begin to amass. OK, cheap extras. But then the TV begins to show the outside world —

and suddenly you’ve got dozens of men with guns setting up posses, and then military officials apparently in Washington D.C., being hounded by the press; and then our heroes attempt to escape and there’s bombs and shooting and fire and explosions! You become unsure of where it might go next, and that’s never a bad thing.

Some of the photography also belies the ultra-cheap budget. Not all of it — a few bits look exactly as cheap as they were — but a lot looks great, actually. As I understand it, there still isn’t a definitive Blu-ray edition, but the UK Region B Optimum disc offers superb picture quality (it’s slightly cropped in places, apparently, but not noticeably so to the unfamiliar eye). Whatever the motivation (it may well have been budgetary rather than stylistic), shooting in black & white lends numerous great effects, from moody film noir lighting in places, to a kind of documentary realism at others. Sometimes it just makes it plain old creepy — towards the end, with the kid, and the basement… brr. Much more chilling than bright red ‘blood’ and other ‘stuff’ just being splattered left, right and centre. Indeed, black & white helps to hide any limitations in special effects or make-up, adding impact to every scene featuring the ghouls.

The low cost is probably part of why it’s so small and contained, the same route so many low-budget genre filmmakers still take today. The pay-off is that it becomes an interesting character drama in a horror situation, as much about creeping terror as gore (though it certainly has its moments of the latter). 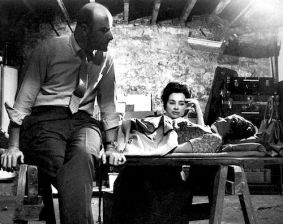 That may not be to the taste of the gore-hounds that the horror genre can attract (particularly zombie movies, with all their flesh-ripping), but it does make it of more merit to a wider film-fan audience.

As the extent to which you can tell a story with just a few characters in one house reaches its limit, and the glimpses of the outside world suggest that a solution to the outbreak may be presenting itself, and as things begin to look more and more hopeful… it all goes to hell — spectacularly. It’s not just that “all the action is in the last 20 minutes”, as some dismissively assert (for one thing, there are at least two ‘action sequences’ earlier on; and it’s more like the last 30 minutes than 20), but that once things Go Wrong they really, really Go Wrong. If only our heroes had just waited it out, etc. But then we wouldn’t be treated to some of the film’s most striking imagery, including a fast-cut stabby murder to rival the one from Psycho in terms of effectiveness.

And after all seems said and done, there’s that ending — the one that cost the film a mainstream release from a major distributor when the filmmakers refused to alter it. It’s also the bit that provokes the most discussion about the film’s commentary on ’60s American society and attitudes: is it making a point about racism? Romero insists it isn’t. You can debate that if you like; personally, I can see where he’s coming from (it’s not quite refined enough thematically to be making a statement), but, either way, it’s a shockingly effective climax. The under-the-credits series of stark, journalistic photos just ram the point home… though they do also seem to lend credence to the allusions some feel the film is making.

After nearly five decades, numerous sequels, innumerable remakes, rip-offs, and films just plain influenced by it, you’d expect a low-budget shocker to have gone stale. The most remarkable thing about Night of the Living Dead, then, is just how well it holds up. It still feels fresh, with a story and style that seem as if it could have been made yesterday, only the fashions and film stock letting us in on its ’60s origins.

Romero thought he was making a rip-off of Richard Matheson’s I Am Legend. Instead, the originality and perspective he added to the mix spawned a whole new subgenre; one that, as I demonstrated at the start, is increasingly dominant in the horror landscape. I’m no expert in the field, but even if Night of the Living Dead has been equalled or bettered, it’s a film that’s still capable of standing beside the countless follow-ups that all owe it a debt.

Part of Week of the Living Dead for Halloween 2013.

Night of the Living Dead placed 8th on my list of The Ten Best Films I Saw For the First Time in 2013, which can be read in full here.