It’s a line we’re all over-familiar with now, almost to the point of cliché (which is why it’s largely been dropped from the Craig-era reboot), but it became that way because of the moment, precisely eight minutes in to Dr. No, when it’s uttered on screen for the very first time. (Wouldn’t it have been good if they’d managed to place it at exactly seven minutes?) Sean Connery reportedly spent a whole morning fluffing the line before, in true Scottish style, having a large stiff drink at lunch and then nailing it in one. But credit for the moment’s impact is at least as much due to director Terence Young, keeping Connery’s face off screen to the point of absurdity, delaying the reveal through a lengthy stretch of card game, until Sylvia Trench asks her simple question, and suddenly there he is, cigarette hanging from his lip, the now-famous theme bursting onto the soundtrack… It’s a moment that is built to be iconic, and my how it succeeded!

But that’s how an awful lot of Dr. No is constructed. Witness the posters — “the first James Bond film adventure!” Who would dare make such a claim today? Imagine if they tried putting that on John Carter, say — and that’s precisely why they don’t. The Bond series wouldn’t become the phenomenon we know until Goldfinger, a hit that’s also largely credited with defining the formula, and Thunderball, a genuine global mega-hit of epic proportions. 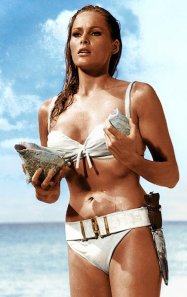 Yet for that received wisdom about Goldfinger, ever so much of the familiar Bond recipe is here from the off: the gun barrel sequence, a dramatic pre-titles (albeit post-titles here), the music-driven silhouetted-girls-filled title sequence (even if they’re clothed here), Bond’s casual attitude towards women, his dry humour, his relationships with M and Moneypenny, his detective skills, his fighting skills, his driving skills, the megalomaniac villain, his extravagant lair, and of course the Bond girls — indeed, for all of the fame of Goldfinger’s gold-covered beauty on the bed, Honey emerging from the ocean is still the most iconic Bond girl of them all. And I imagine there’s more I’ve neglected to include.

As a film, Dr No could come off as a funny old mix. It starts off as a fairly straight spy thriller, but gradually slips in some more extreme elements until, captured on the titular villain’s island, it goes all-out ’60s pulp sci-fi — an underground base, hewn from rock, linked with huge metallic doors or Star Trek-esque sliding numbers, lit with a purple glow; vast angular rooms housing nuclear equipment and sundry other faux-scientific gadgetry… I don’t know if Ken Adams’ set defined this iconography or were born of it, but think of ’60s futurism and the design work in Dr No’s lair is what will come to mind.

The other advantage Dr. No has is its as-yet-undefined Bond. So there’s fewer puns, but instead wit and sarcasm. He’s more ruthless, too: for my money, the sequence where he sets himself up in Miss Kano’s house to wait patiently for the arrival of Dent, then dispatches him with a combination of preparation (“that’s a Smith & Wesson, and you’ve had your six”) and an arguably-unnecessary second shot, just to be sure, is amongst the series’ finest depictions of the reality behind Bond’s line of work.

Plus, freed from the need to constantly Do Bond-Like Things, we get some solid detective work from our hero, rather than just turning up and saving the day. To put it another way, there’s a mystery and a story, not just a series of set pieces.

It’s often overshadowed by the film’s that follow it, and not without reason (as we’ll see in a minute, From Russia With Love is a fine Cold War spy thriller in its own right, and Goldfinger does refine the formula to a repeatable point), but it would be wrong to ignore Dr. No. It’s not yet quite the typical Bond movie, but it’s close enough that the casual observer wouldn’t notice, and it’s an exciting, fun beginning to a franchise.

Screenwriter Wolf Mankowitz took his name off the film when he saw the dailies, fearing a huge flop; but, as history has shown, whoever came up with the poster’s tagline was closer to the mark.