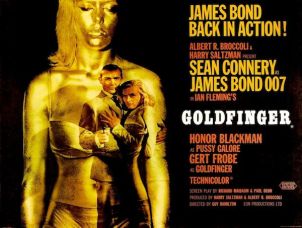 It’s long been held as a truism that, though it’s the third film, Goldfinger really defined ‘the Bond formula’; and I’ve long argued against that, pointing to the elements that were ready-to-go in Dr. No and added by From Russia with Love. While that’s not untrue, it’s fair to say that Goldfinger is the Bond formula distilled: the previous two films may have debuted many key ingredients, but it’s Goldfinger that adds the finishing touches and perfects the recipe.

It’s also where the Bond phenomenon began to kick in, reaching its height with Thunderball the year after, and has oft been cited as The Greatest Bond Film — meaning there have been more than enough words written about it (whole books, I’ve no doubt) down the years. What little can I add? Not much, I’m sure, but reiterate what you already know. So instead I’ll say this: Goldfinger isn’t my favourite Bond film. I didn’t even like it that much last time I watched it (the running best-of list I was compiling last time I watched all the Bond films ranks it below three other Connerys), probably due to the constant high expectation placed upon it. My draft review called it “less than the sum of its parts”. Now, I think that’s a bit harsh.

However, I did also note that “those parts are mostly so excellent that its still a greatly entertaining film, and, I’m sure, not undeserving of the adulation lavished upon it by so many”, and that’s certainly true. You only have to list bits to bring back fond memories: the pre-titles (filled with multiple memorable moments, even if it’s completely unrelated to the rest of the story); the title song; the title sequence (by Robert Brownjohn, not Maurice Binder); the gold-painted girl; the gold game; Oddjob and the statue; the Q scene (despite Goldfinger’s Q-branch-tour being the archetype, it’s not repeated in a similar manner for decades); the gadget-laden car; the stunning Swiss locations; “no Mr Bond, I expect you to die”; Pussy Galore; the epic raid on Fort Knox; Oddjob and the electricity; the clock stopping at 007; Goldfinger being sucked out of the plane; hiding from rescue in the life raft… That’s quite a haul. Even the less feasible bits, like the cardboard-cut-out gangsters, have a certain charm.

I’d forgotten just how funny it is too. That’s part of ‘the Bond formula’, of course, and it is present in Connery’s first two films. There, however, it’s more akin to the Daniel Craig era: just flashes of wit and sarcasm; but Goldfinger is where it’s really defined — and in the right balance, unlike some later entries. Although Russia debuts a couple of them, this is really where the famous Bond puns make their mark (“Shocking. Positively shocking.”); but not only those, because there’s a scattering of general humour too. After Bond’s attempted escape at Auric Stud, the roomful of henchmen guarding him, revealed by Hamilton through a slow camera move, has always been one of my favourite gags in the series.

If you think about it too much then the plot is like a machine-gunned windscreen — spattered with holes. But they’re mostly minor niggles rather than glaring errors, and it’s more than covered by the fun you’re having. There are several films that would contend the top spot on my list of Favourite Bond Films and Goldfinger probably isn’t one of them, but that’s a personal thing and it’s surely destined for at least the top ten.