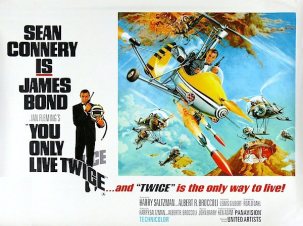 Everyone knows You Only Live Twice; if not from the film itself then from cliché and Austin Powers. It’s the one with the hollowed-out-volcano base; the scarred villain with the cat; a piranha pool to dispose of failed lackeys… If the first three films defined James Bond, this one defines the Bond villain.

Yet for all that, in recent years it seems to have fallen into some kind of disrepute. I used to think it was quite well regarded, but these days you’re more likely to see it as a surprise choice in the lower reaches of “worst Bond films” lists than somewhere in the best-of. Perhaps its the occasionally old-fashioned treatment of the Japanese, at its worst when Bond undergoes implausible plastic surgery to become ‘one of them’ — an implausible, slightly caricatured one at that. Hey, it could’ve been a lot worse.

For me, it’s a minor point in a sea of positives. There’s Little Nellie, which may look silly but features in one of the series’ most thrilling action sequences — and, like the jetpack in Thunderball, it’s real! There’s a fabulous array of gadgets, from the X-rays checking Bond out when he goes undercover, to the helicopter that can pick up a car and drop it in the ocean. 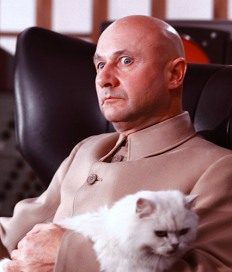 There’s that rooftop chase, where the camera just keeps pulling back and back and back to reveal the action. There’s Charles Gray’s cameo-sized but memorable role as MI6’s man in Japan, or Tetsuro Tamba’s loyal and capable Tiger Tanaka — why didn’t they bring him back? He’s better than any Leiter we’ve yet seen.

It’s not perfect. The middle is a bit confused, Connery occasionally lets his boredom with the role show, and it lacks the globetrotting scope of other adventures. But it puts Japan to good use, Connery is Bond, and on either side of the wavering there’s much fun to be had. The climax, in Ken Adam’s impossibly huge set — one of his greatest, and that’s saying something — which fills with explosions and ninjas and all sorts, is still an awe-inspiring achievement today.

I can see that YOLT isn’t perfect, but I don’t have much truck with the complaints against it. It’s not only a defining Bond adventure, it’s one of the most fun and exciting too. It’s not in contention for the series’ best entry, but it’s up there with those right behind.