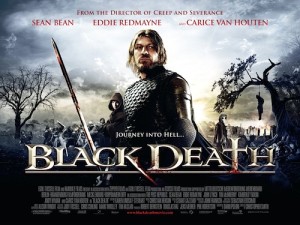 Sean Bean and his ragtag band of knights investigate an unaffected village during Ye plague-adled Olden Days in this folk horror from the director of Creep, Severance and Triangle.

Though not entirely devoid of gore or jumps, this is more a creeping horror; a tale of the supernatural where an uncanny mood is more important than visceral thrills. I don’t think it’s too lofty to suggest comparison to The Wicker Man rather than an historical Saw.

Still not for the faint-hearted, Black Death is the kind of eerie experience that can weave a spell over viewers who aren’t genre aficionados.

In the interests of completing my ever-growing backlog, I decided to post ‘drabble reviews’ of some films. For those unfamiliar with the concept, a drabble is a complete piece of writing exactly 100 words long.