In tribute to the great Peter O’Toole, who passed away on Saturday, today’s review is his defining role, and this year’s very special #100…

If you were looking for the archetype of an epic movie, Lawrence of Arabia would be a strong contender. It has a wide scope in just about every regard, from the desert locations that stretch as far as the eye can see, to the thousands of extras that fill them, to the glorious 70mm camerawork that captures it all, to the sweeping story that also contains a more personal throughline, to the 3½-hour running time.

The film begins at the end, with Lawrence (Peter O’Toole) dying in a motorcycle crash. At his funeral, various people express how they never really knew him. From there, it’s back to the height of the First World War, where Lawrence is performing menial duties for the British Army in Cairo before (in a series of events too incidental to go into here) he’s sent off to Arabia to assess the military prospects of Prince Faisal (Alec Guinness). Instead of merely reporting back, however, Lawrence leads some of Faisal’s men on an impossible mission… and succeeds. Supposed to be the British Army’s liaison with the Arab forces, he more ‘goes native’, leading the Arab troops in successful attacks on the enemy Turks, before considering turning on the British for Arabia’s independence…

And that’s much of the film summarised. But it’s almost besides the point, because it’s in the telling and details that Lawrence of Arabia thrives. For instance, as a war epic you might expect numerous battle scenes, and you get some of those; but the 140-minute first half deals with Lawrence’s journey to meet Faisal and then his first victory, while the second part begins later, after Lawrence has won many significant victories. Director David Lean is concerned more with this unknowable man, how he rose and how he fell, than with the ins and outs of all his triumphs.

As such, the film hangs on the performance of O’Toole. We’re told Lawrence is an enigmatic figure and his depiction arguably supports that — we never fully get inside his head; we’re always observing him. And yet that’s no bad thing, because even as Lawrence’s confidence waxes and wains, as his allegiances shift and alter, we can feel what he wants to achieve, why he thinks he can. He attempts the impossible and succeeds, which is why he later attempts a bigger impossibility, and must leave the pieces to the more level-headed men, who didn’t have his genius but can therefore play the political game better than he.

O’Toole carries us through all this with the skill of a seasoned pro, and yet this was his first major role. No wonder it made him a star over night. He makes every tweak in Lawrence’s attitude plausible; sells both the supreme self-confidence and crushing tumbles to inadequacy. Whatever else is going on, he draws your attention — not harmed by his piercing blue eyes, and looks so beautiful that Noel Coward remarked if he were any prettier they’d have to call it Florence of Arabia.

His command of the screen is even more impressive considering who’s playing opposite him. With hindsight it may be a mistake to have Alec Guinness blacked up as an Arabian prince, but his is not a caricature or cartoon villain. Indeed, Faisal is one of the most respectable men in the film, far more so than any of Lawrence’s British superiors. I said before that no man here outclassed Lawrence’s genius, but that would really be wrong: while he might not share Lawrence’s outward brilliance, Faisal is intelligent enough to hold back, to recognise that Lawrence will do much of what needs to be done, but that someone with a calmer head will need to be there to sweep up afterwards.

Then there’s Omar Sharif. Famed for having one of the greatest introductions in the history of the cinema — and one of the longest — there’s much more to his character than that sequence. At first Lawrence’s apparent enemy, he becomes perhaps the closest thing he has to a friend, before it disintegrates again. Such is the volatile nature of Lawrence’s relationship with most of the characters. A psychiatrist could probably diagnose him with some kind of mental health issue.

While those three may dominate, a film of this size has room for many more characters, and — at the risk of just sounding like a cast list — actors such as Anthony Quinn, Jack Hawkins, José Ferrer, Anthony Quayle, Claude Rains and Arthur Kennedy all make a mark, to one degree or another.

A similar legacy is left by those behind the scenes. Maurice Jarre’s score is the reference point for many a period desert epic — indeed, his music is so synonymous with such settings that it has arguably transcended its source to simply be what music for those locations and times is. It graces a film edited with class by Anne V. Coates, where scenes are allowed to play in luxuriantly long takes at times, while at others smash edits throw us from one location to another. This is undoubtedly supported by F.A. Young’s cinematography, where the wide frame can encompass so much action that there’s no need to cut amongst close-ups; and which can show the world in such majesty that you want it to hold for long, lingering takes. Even viewed on the small screen, the 70mm photography shines, especially on Blu-ray.

And, of course, overseeing all that, and surely as attributable for praise as any of those individuals already mentioned, is director David Lean. His ability to marshal a project of his size is unparalleled. To play it out across such a length without it feeling self-indulgent or overplayed is another skill, in part dictated by the material, but no less by the way that material is portrayed. I think, in the face of all this praise, there’s an argument that the film’s size has sometimes run away with. I couldn’t begin to tell you where a cut should be made or an element changed, and I’m not sure I’d presume to even if I had an idea (it was already sliced up once, then restored in 1989). Perhaps it doesn’t actually need changing at all — but on a first viewing, oh my, there’s an awful lot to it! 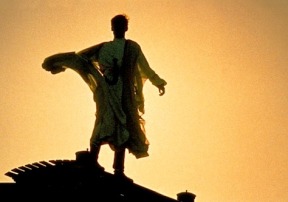 As with any great film, Lawrence of Arabia is at least the sum of its parts. Replace any of the artists I’ve mentioned, or surely many more, and it would not be the film it is. In fact, when working on such a scale, this is more than a film — it’s an experience. And if that sounds pretentious, well, tough. If you haven’t experienced it yet, try not to leave it as long as I did.

Lawrence of Arabia was viewed as part of my What Do You Mean You Haven’t Seen…? 12 for 2013 project, which you can read more about here.