In the weeks leading up to its theatrical release, it was already known that World War Z was going to be an almighty flop. An unscrupulous movie studio had taken a cult novel and thrown away everything but the title, alienating its existing fanbase. They’d spent a fortune making a movie in a traditionally R-rated genre that, if released at R, could never make its money back, and if released at PG-13 would never attract an audience. Then they reshot the entire third act, pushing the budget through the roof and ensuring the resultant film would get critically mauled. A fanbase snubbed, an impossibly huge budget, a genre/rating disconnect, and unavoidably poor reviews to come — World War Z was going to flop, and it was going to flop hard.

Then it came out, and became the highest-grossing film to star Movie Star™ Brad Pitt, and the highest-grossing original film of Summer 2013, and made nearly triple its budget worldwide, and even got fairly good reviews. Maybe I was reading the wrong sources in the run up to its release, or maybe it really was that rarest of things, perhaps even unique: a movie hype-resurrection that was less zombie and more phoenix.

The film sees Pitt’s retired UN investigator called back to duty when a rapidly-spreading plague, which turns people into zombie-like rabid creatures, breaks out around the globe. With his family in tow, he escapes an over-run Philadelphia and ends up with what’s left of the US population on a small fleet of ships, before jetting off around the world on a hunt for answers and, hopefully, a vaccine. Cue large-scale action sequences as director Marc Forster aims for an apocalyptic sci-fi/action epic rather than the zombie genre’s usual stomping ground of claustrophobic supernatural scares. 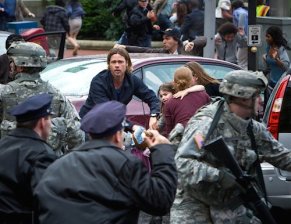 That, at least, is something different. The first half-hour races through stuff we’ve seen time and again: zombie attacks, humans turning on humans as they loot supermarkets, etc. Here the zombies are of the 28 Days Later-style speedy variety, all the better for creating blockbuster action sequences, such as a huge chase through crowded streets, or a running fight up the stairways of an apartment building. This is where the PG-13 certificate shows through (even though this cut is technically unrated in the US, the fact both versions received a 15 over here is telling): there’s little focus on violence or gore; which is fine, but won’t satisfy the more blood-hungry genre fans.

It’s after this that things, as noted, turn from claustrophobic to post-apocalyptic. The storyline feels moderately fresh, showing us the global scope of such an outbreak, rather than how a global event impacts a small group of people. I believe this is the closest the film gets to the spirit of the novel (which I’ve not read, so take that comparison with a pinch of salt). However, what’s new to the zombie genre isn’t necessarily new in any other respect, and by the time we get to Jerusalem and the characters are again being chased through crowded streets, it begins to feel a tad repetitive. Some of the sequences work well though, particularly a zombie outbreak on a passenger plane.

The re-shot final act is a breath of fresh air. Apparently the originally-filmed version was yet another epic battle, which has been switched for a more tense creep around a semi-abandoned research facility in… Wales. Yep, a big budget Hollywood action movie climaxes in the middle-of-nowhere in Wales. I quite like that.

It’s a Wales populated by a Londoner, a Scotsman and a Spaniard, but still. I say “more tense” because this is far from the most nail-biting zombie film you could see. The finale is a nice change of pace, and does work as a climax in spite of the bombast that precedes it, but these are zombies as teen-friendly action movie menace, not adult scare-inducers, so don’t except to feel much fear or surprise.

As to the extended cut, it adds only about seven minutes… but there are 121 differences. I can’t even be bothered to read that properly, never mind recount it. There seem to be myriad tiny extensions to all the action sequences, many of them literally lasting a fraction of a second — someone watched this really closely! I can only presume this is actually the original cut, which was then trimmed for the sake of the MPAA to create a theatrical version, because who would consciously go back to add so many little bits? Some are even described as “very unnecessary extension”s by that summary. Other moments do expand on character, though in a subtle fashion (looks like the attempted rape of our hero’s wife, and the murder of one of the wannabe rapists, previously got the snip), or do add to the gore — clearly, it’s too much for a PG-13, but certainly within the realms of a 15. I can’t imagine any of it makes a great deal of difference to the overall experience, however.

Generally, World War Z is a competently entertaining blockbuster. It moves pleasingly fast, with characters quickly and lightly sketched rather than lingered on — not to everyone’s taste, and I imagine some will find it emotionally cold in the way so many recent spectacle movies are. There’s perhaps room for more, particularly from Daniella Kertesz’s Israeli soldier, who is nonetheless somehow the film’s most appealing character;

but I don’t think it was the filmmakers’ aim to make us feel the characters’ plight, but instead to show the scope of a worldwide disaster. It does that pretty well, even if the occasionally-CGI zombies prove to be an I Am Legend-style plasticky distraction, especially when coupled with impossible swooping camera shots — it’s better and more effective in the sections where there’s a grittier feel to the camerawork and practical zombie make-up.

As it lacks the social subtext or extreme gore that the two branches of zombie fandom most value, I don’t think WWZ will find an enduring place in genre-fans’ hearts. As an epic summer action blockbuster, however, it largely passes muster.