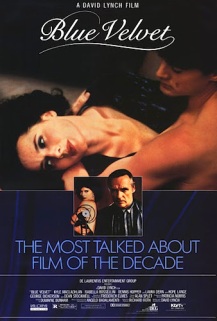 Before he brought the disquieting underbelly of small-town America to television audiences with Twin Peaks — and revolutionised the medium in the process — auteur David Lynch subjected cinemagoers to its perversions in this 1986 cult masterpiece, the first cohesive expression of concepts, themes and motifs (and cast members) that would inform the rest of his career.

Twin Peaks’ Kyle MacLachlan plays Jeffrey Beaumont, home from college to visit his hospitalised father when he discovers a severed human ear in a field (as you do) and, unable to resist playing private eye, gets drawn into a bizarre web that includes a burgeoning romance with Laura Dern’s high school student, a twisted sexual relationship with Isabella Rosselini’s trapped nightclub singer, and, most famously, Dennis Hopper, whose character and performance invites descriptors like “creepy” and “perverted” but transcends such notions to the point of their obsolescence.

There’s a mystery plot to tie things together, but it’s not really Lynch’s point: by the end, things that would be The Big Twist in other movies are almost glossed over; present because they’re needed for clarity, but not what Lynch wants to focus on. The film is heavy with symbolism, although for once you don’t need to be a genius to spot the major signifiers: it opens with a shot of a lovely suburban lawn, but moves closer until underneath it we see a swarming nest of nasty bugs. I was always led to believe Blue Velvet was about the secrets lurking behind small-town America’s white picket fences, and parts like that opener suggest such a reading.

But… is it, really? The white-picket-fence-dwellers are pretty clean; it’s the people inhabiting the scuzzy apartment blocks and industrial estates nearby who are the problem. Those characters are as corrupt and degenerate as their abodes might lead those with regular prejudices to suspect. It’s a less subversive point of view, and I don’t think it’s what Lynch was actually going for. Anyway, the entirety of his moviemaking technique is so outré that you can’t help but find the whole twisted nonetheless.

Exposing the (sometimes-)reality behind the perfect veneer of American suburbia was not something all audiences at the time were prepared to embrace, though a couple of decades or so of emulation — not to mention the odd news story exposing reality — have led such a perspective to be less controversial. Yet the extreme ways Lynch employs to depict this nastiness mean the film hasn’t lost any of its impact. Back in 2001, critic Philip French wrote that “the film is wearing well and has attained a classic status without becoming respectable or losing its sense of danger.” Another 13 years on and I think that quote is still on the money. Blue Velvet is a film that features on respectable “Best Ever” lists (it’s in the top 100 of Sight & Sound’s latest, for instance, tied with Blade Runner (amongst others)), but is still quite shocking to watch. It’s not so much that it’s sexually or violently graphic — though, in places, it is a little — but the mood and feeling Lynch evokes is so darn unsettling and weird.

“It’s not a movie for everybody,” Lynch himself said (to Chris Rodley for the book Lynch on Lynch). “Some people really dug it. Others thought it was disgusting and sick. And of course it is, but it has two sides. The power of good and the power of darkness.” He’s not wrong. Despite the acceptance of it in some mainstream circles (arguably, you don’t get much more “mainstream” than the Best Director Oscar nomination Lynch received), Blue Velvet remains the very definition of a cult film: some will (and do) love it unreservedly; some will (and do) hate it with a passion; and some, like me, will look it and kind of go, “…hm.” The more I read about it, though, the more I warm to what Lynch was tilting at. Given time, and inevitable (though, knowing me, a long time coming) re-views, I can only see my appreciation growing.

Blue Velvet was viewed as part of my What Do You Mean You Haven’t Seen…? 2014 project, which you can read more about here.

The Twin Peaks: The Entire Mystery and the Missing Pieces Blu-ray box set is a surefire contender for “release of the year” even before it is released — which is tomorrow, Tuesday 29th July, pretty much worldwide.