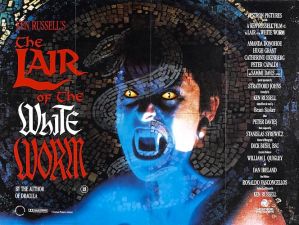 The Lair of the White Worm looks cheap, has a ridiculous story, overacted characters and overcooked dialogue, and by all rights should be a disaster. And maybe it is… but I don’t think so. In the right frame of mind, at any rate, it’s a whale of a time.

Perhaps it’s “so bad it’s good”, but I’m also not sure of that — I think perhaps director Ken Russell and his ensemble (which includes Peter Capaldi, Hugh Grant [both of whom have now played the Twelfth Doctor] and Amanda Donohue) knew they were creating the ludicrous. There’s an indefinable charm that a hundred slicker, objectively more accomplished, films just can’t match.

To be frank, the whole thing’s pretty much worth it just for the following monologue, delivered by Donohue’s priestess-type:

Now, if you’re sitting comfortably, I shall tell you why you must not be afraid to die. To die so that the god may live is a privilege, Kevin, and if you know anything at all about history, you will know that human sacrifice is as old as Dionin himself, whose every death is a rebirth into a god ever mightier! 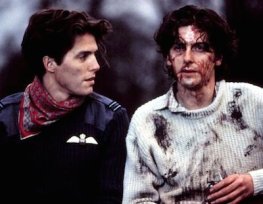 If you don’t really understand why that’s so good, The Lair of the White Worm isn’t for you. If it clicks, however, then this is a forgotten minor gem.