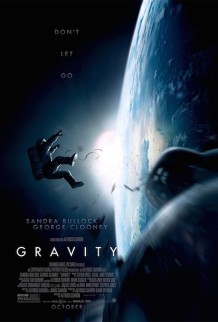 A near-future thriller (albeit one set in space), the destruction of a satellite sees a cloud of debris hurtling round the Earth, in the process destroying the space shuttle of Sandra Bullock, George Clooney, and other less-fortunate crewmembers. Using Clooney’s experimental space-jetpack, the survivors set off across the void for the nearest space station, racing against their oxygen supply to find a way home…

As many have noted, Gravity is a little light on plot. That’s a dealbreaker for some, it would seem, which I think rather misses the point. This is a survival story, predicated on two things: one, the desperate attempts of our heroine to triumph against increasingly-poor odds; and two, the spectacle of weightlessness and space. Not every movie needs a complex storyline to keep it going; not every film needs to only be about its plot. As co-writer and director, Alfonso Cuarón drives the film admirably on the aforementioned survival attempts and some swiftly-sketched character development.

The spectacle may have worked best on the big screen in 3D, but Cuarón’s talent as a director means it translates at home, too. That most of the film was created in computers means his penchant for long takes is indulged, but the impact of those is paramount: rather than fast-cut action sequences (even if the speed of cutting has been pushed to extremes in recent years,

quick editing has always been a way of creating excitement in that arena), the never-ending shots serve to make you feel closer to events, right alongside Bullock, almost wishing it would stop. Plus there’s skill in being able to show us what we need to see from a single vantage point, without the easy option of being able to cut to a different angle to clarify a detail.

Left to carry much of the film solo, Bullock’s performance is strong enough, but this isn’t a deeply-drawn character. There’s something to her, and the situation she’s been put in is trial enough without the need for backstory, but is it really a performance that cries out for awards recognition? Not as much as the rest of the film.

Speaking of which, controversy has occasionally dogged Gravity — on two fronts. Firstly, that BAFTA awarded it Best British Film. Cue varying degrees of outrage and incredulity that an American-funded film about American astronauts could be considered British. The flipside to this is that Cuarón has made Britain his adopted home; and while the Big Studio may ultimately be American, the production company and producers are British. It was shot in Britain by a British crew, and the groundbreaking CGI — which even James Cameron, he of great determination and resultant innovation, said couldn’t be done — was created in Britain by British artists. 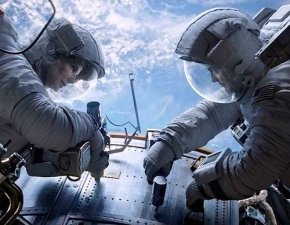 The most high-profile jobs — the actors, the studio — may be American, but everything else is pretty darn British. Rather than cry “that’s ridiculous! Give it to a proper British film!”, we should be keen to point out that, actually, this surprise global mega-hit wasn’t made in America, but in Britain, by all the talented filmmakers we have here. Rule Britannia, etc etc!

Secondly, there’s the genre issue. Most have labelled the film “science fiction”, primarily because it’s set in space. The hardcore SF brigade take umbrage with that, however: technically it’s set almost-now, with present-day technology. This is a story that Could Happen Today, not a distant dream of what Might Happen Tomorrow. Really, it’s a bit of a mixed bag: technically it is set in the future — that’s proven by little things like flight numbers and the existence of a finished space station that, in real life, is still being built — and makes use of technology that doesn’t actually exist (the space-jetpack I mentioned earlier), plus it depicts a massive-scale disaster that, obviously, hasn’t happened. But that’s no worse than many an earthbound thriller, which routinely use just-beyond-possible tech (look at all of Bond’s gadgets, even (at times) in the newly-grounded Craig films) and depict huge events that haven’t actually occurred (Presidential assassinations, nuclear detonations, etc). So, really, Gravity is no more sci-fi than those, except for it being set in space… which immediately categorises it as SF to your average viewer.

While I sympathise with the idea that it’s not A Science Fiction Movie, but instead A Thriller (That Happens To Be Set In Space), you can’t really deny its SF-ness. OK, if we’re classing this as SF then so too should be films like The Sum of All Fears, or most of the James Bond canon; but really that’s just an argument over technicalities — one I’ve indulged for far too long.

The point is, however you classify it, Gravity is an exciting, spectacular, technically-impressive movie; one that overcomes the alleged need for a huge screen and 3D to work even in the corner of your living room.

It placed 1st on my list of The Ten Best Films I Saw For the First Time in 2014, which can be read in full here.