There seems to be a certain brand of animated film that I think looks dreadful so avoid, then I hear good things about, so I try it and find that, actually, they are really good. There was How to Train Your Dragon, then Cloudy with a Chance of Meatballs, and now — yes, you guessed it — there’s Monsters vs Aliens.

On her wedding day, Susan is struck by meteorite whose contents causes her to grow to 50 feet tall. Seized by the government and renamed Ginormica, she’s taken to a special facility that houses an array of other creatures: B.O.B., an indestructible blob; Dr. Cockroach, a part-insect mad scientist; the Missing Link, a prehistoric fish-ape hybrid; and Insectosaurus, a skyscraper-sized grub. But when evil alien Gallaxhar arrives seeking the energy that gave Ginormica her powers, it’s realised the only way to combat his giant robots is by unleashing the monsters. Yes, it’s The Avengers with ’50s B-movie monsters.

If that doesn’t sound like a fun concept, you’re probably already on a hiding to nothing. It has a love and understanding of B-movies that should keep many a genre fan happy, suggesting it was created for them almost as much as its true audience, namely the same kids as… well, every other US animation. I suppose in that regard it’s a bit like The Incredibles, still one of the best superhero movies in any form. 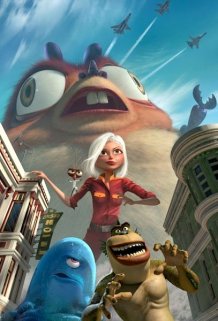 That’s a big comparison to make, but one I think Monsters vs Aliens can withstand more often than not. The climax is a little samey — why do all action-y kids CGI movies seem to have the same final act? — but before then it has a nice line in satirical humour, bold and broad characters, and even some quality action sequences. This is not a film where someone had an idea and coasted on it, but where they poured in a lot of love and elements you might not expect — see: satire, in an American kids’ movie! Not to mention the emotion you’ll get from a giant moth. I mean seriously…

Computer-animated kids movies are two-a-penny these days, meaning if it doesn’t have “Pixar” above its logo or a number at the end of its title, there’s a good chance it’ll be brushed off as “oh, another one”. (Of course, to get the aforementioned number on a title you need a successful unnumbered one first — like the other two films I mentioned in my introduction, for example.) There’s probably a lot of dross that’s being rightfully ignored, but some gems seem to have passed by with less fanfare than their enjoyment-value merits. Megamind is one that comes to mind; Monsters vs Aliens is another.