A sequel to The Hunt for Red October in technicalities only (it’s another Jack Ryan adaptation, but he’s been recast; only one actor returns, in fact), Patriot Games is another political/espionage thriller from the pen of Tom Clancy.

On a working holiday in the UK, former CIA analyst Jack Ryan (Harrison Ford) coincidentally thwarts an IRA assassination attempt on members of the royal family, killing one of the assailants. Also among the terrorists was the dead one’s brother (Sean Bean), who sets off on some new terrorising plot that ultimately leads him to the US, where he plans revenge…

That’s more or less a summary, anyway, because Patriot Games is a sprawling tale. Although most of the major characters start off connected by that failed assassination, they soon splinter to go about their business in unconnected sequences, which finally come back together towards the end. To describe it as “novelistic” might be obvious, considering it’s based on a novel, but it’s not been streamlined for the big screen. The 112-minute runtime (PAL) looks speedy by today’s standards, when every blockbuster comfortably passes two hours, but it’s a lengthy narrative from a time when big movies were less overblown and got on with things — tell this amount of story today and you’d probably pass the three-hour mark.

Unfortunately, sometimes it feels like Patriot Games has. Progressing multiple separate narratives gives a disjointed feel, leaving the viewer waiting for it to all tie together in some way. The storytelling is fitfully slow and kind of baggy, lacking pace. 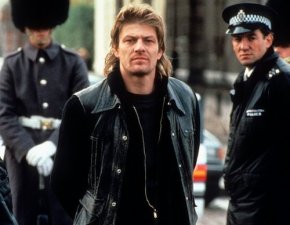 There’s a nasty synth score, just to make things drag more. There are some moments of brilliance though, not least the beautifully-shot boat chase climax. There’s also the dubious joy of seeing Sheffield’s most famous son, Sean Bean, doing an Irish accent. Co-terrorist Polly Walker is English though — twist! Not that her subplot really goes anywhere. Possibly she just couldn’t do the accent.

Amusement comes unintentionally, and mainly thanks to its depiction of the Irish characters. One’s called Paddy O’Neill. No, really. Another seems to spend his time just sat around watching Clannad videos.

Given its pedigree you’d expect Patriot Games to be a classic ’90s thriller. I’ve always been a bit surprised that it’s often around, but not more talked about. Now that I’ve seen it, I see why. Disappointing.

Patriot Games is on More4 tonight at 9pm. The most recent Jack Ryan movie, Shadow Recruit, is available on Now TV now and premieres on Sky Movies Premiere this Friday.