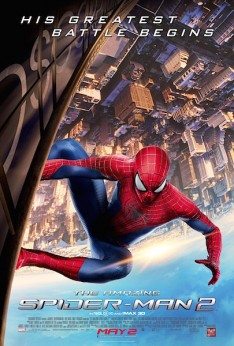 Despite the fact that the first film of Sony’s Spider-Man reboot was a wannabe-hipster over-angsty teen-romance take on the webslinger, which needlessly re-told his origin story and posted unexceptional box office takings, it seems there was some degree of consensus that it wasn’t too bad. I don’t agree. Two years later, this sequel seems to have met with a largely negative response, accused of crimes like navel-gazing and franchise-building. Again, I don’t agree — I think this is the best Spidey movie since the previous Spider-Man 2.

Dialling down the rom-com elements to their appropriate subplot level, ASM2 sees Spidey (Andrew Garfield) having to deal with an electricity-powered supervillain (Jamie Foxx) trying to destroy the city, and the return of his childhood friend Harry Osbourne (Chronicle’s Dane DeHaan), who inherits OsCorp when his father passes away. If you’ve seen Spider-Man 3 (the last one, not the one that’ll be out in a few years… maybe), you’ll know where that’s going…

Fortunately for us, ASM2 has some new twists on the old formulas. Harry’s transformation may be inevitable, but it’s played with different emphasis and motivations. Plus DeHaan is a much more unusual and engaging actor than James Franco, his version of Harry notably different from the previous “pretty young rich kid”. The storyline afforded to Foxx’s Electro is in-keeping with previous Spider-baddies — a fundamentally good person who ends up misguided — but his cool powers keep things visually engaging. Their first big face off in Times Square felt like one of the best effects-driven action sequences I’ve seen for a while, in fact. 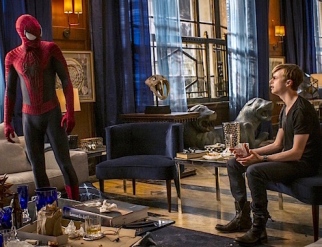 Then we have the much-maligned backstory about just what Peter Parker’s parents did all those years ago, before they abandoned him with Uncle Ben and Aunt May. There are pros and cons to this: it’s all new, which at least makes it interesting and unpredictable because it has no forebear in comics or films; but it’s also a pretty stock set of circumstances. Worse still, it robs Spidey of a major defining trait: Peter Parker is bitten by a spider by accident — it could’ve been anyone. In this version, it could only have been him. Boo. Sony clearly want an arc plot they can run across a trilogy (or more), so presumably this thread will rumble on… though whisperings that they’re considering some kind of soft-reboot may see it cut short. I wouldn’t complain.

It’s a moderately minor part of the film though, I thought. So too the setting up of some league of supervillains — presumably the Sinister Six, as that’s the first planned spin-off movie. I still think people over-emphasise how much time Iron Man 2 puts into setting up The Avengers at the expense of being its own film; ASM2 does it even less, so I think the complaints are even less warranted. Honestly, there’s so much else going on, why hone in on the one thing you wish it hadn’t done?

That other stuff includes an increased dose of fun and humour — darkness abounds, to be sure, and in everyone’s storylines too; and Webb still dodges the bright-and-breezy tone of Raimi’s movies (which is a shame, because there’s a good argument that that’s where Spidey belongs) — 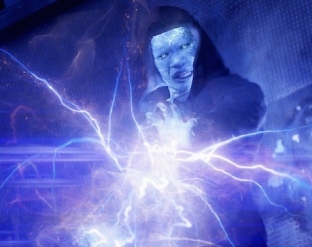 but it’s more textured, at least. Then there’s Electro, who (as mentioned) may have a familiar story, but is nonetheless perfectly pitched by Foxx. His powers lead to some excellent sequences, including but not limited to the aforementioned Times Square duel. He also contributes to the music, in a way, as Electro’s whispered/sung thoughts ‘bleed out’ into the score. It’s creepy, especially as it’s so subtle in the mix — I wondered what the hell was going on at first. I thought it was a fantastic score all round, in fact, bringing in a modern music element that fits the notion of Spidey as a young character perfectly.

While I don’t advocate a like-for-like repeat of all that in future Spidey films — innovate, don’t replicate (is that a saying? That should be a saying) — I hope there are people at Sony who are aware that things in ASM2 do work, and work very well. As they rush headlong to fix the film’s perceived failings in future instalments, purely so that they can make a success out of their desired Avengers-style multi-franchise franchise, I hope they don’t wind up throwing the baby out with the bathwater. Or washing the spider down the drain. Or some other similar but more apt metaphor.

While ASM2 isn’t perfect, I don’t really see what all the negative reviews were on about — I properly enjoyed it. Is it the best Spider-Man film? No. 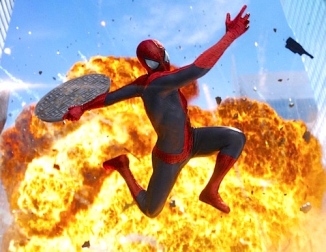 It lacks the confidence, heart and flair that mark out Spider-Man 2, and the bold originality and clarity of purpose that define Raimi’s first Spider-Man. Equally, it doesn’t suffer from the compromised creativity of the forced Spider-Man 3, nor the fumbled plotting and try-hard hipsterism of Webb’s first Spidey effort. It’s a distinct improvement, but beyond that, it’s an entertaining Spider-Man movie in its own right.

The Amazing Spider-Man 2 is on Sky Movies from New Year’s Day 2015.