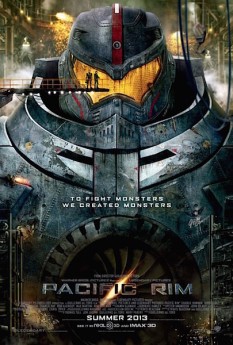 The names writers choose for their characters can sometimes tell you a lot about a movie. Pacific Rim is the kind of film that has characters called Raleigh Becket, Stacker Pentecost, and Hannibal Chau.

This is a film about giant monsters invading Earth, and we fight back with giant robots. It has the logic of the Japanese movies, anime and art that inspired it rather than any basis in the real world. Which is fine — del Toro has said it was aimed at 11-year-old boys (hence the “for over 13s” rating, of course), and it slots pretty neatly into that world. Which means it should also cater to a good many “adult” genre fans, which does make it flopping in America a little surprising. I suppose the lack of a recognisable brand name is a deciding factor in that market now.

Stand out features include blunt, functional, over-explanatory dialogue delivered in largely second-rate performances, but which at least carry us through the story solidly; and fights that are moderately exciting, but could do with zooming out to give a proper sense of scale, not to mention some variety in their primary black-and-blue colour palette. There’s a whole featurette on the Blu-ray about how hard they worked on conveying scale. Oh. Didn’t come across for me. OK, the giant robots didn’t move super fast, but it still felt quicker than I’d expect from something of that extreme size.

Perhaps the problem lies in how the film was obviously made for 3D — not because stuff’s poking out at you all the time, but because of shots that are clearly meant to have great depth, but where everything is in focus. For 2D it could probably do with a shallower depth of field, and maybe this is where the scale went awry

— it was the 3D that added depth and height, and without that (or, as I said, an adjustment of focus to compensate) it’s all a bit… not flat, but not big either. That aside, it is beautifully shot, with excellent lighting.

Yet, for the easy criticisms, Pacific Rim largely entertains. Compared to most of the blockbuster fare targeting 11-year-old boys these days, it’s a positive triumph. Heck, compared to the other films for that age group that star giant robots, it’s Shakespeare. Similarly the music, by Game of Thrones’ Ramin Djawadi, is a little obvious but also suitably fist-pumping, which at least renders it easily enjoyable.

Goodness knows where the mooted animated series and confirmed sequel are going to go with the world that seems so wrapped-up here — but hey, at least this one told a complete, self-contained story. It might fall short of excellence in many areas, but it’s an exciting, fun thrill ride nonetheless.