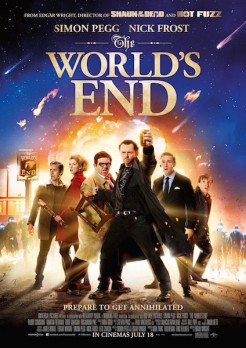 Shaun of the Dead is the favourite of critics and fanboys, and Hot Fuzz seems to have attained widespread popularity, but The World’s End may be the most mature and, in its own way, subtly subversive of the ‘Three Flavours Cornetto’ trilogy. Does that make it the best? Well…

The story sees man-child Simon Pegg gathering his old gang of Sixth Form friends — all now grown-up with proper jobs and lives — to attempt their hometown’s twelve-stop pub crawl, which they failed as teens. Despite lingering tensions within the group, all starts well enough — until they begin to notice there’s something oddly familiar about their old town… almost as if it hasn’t changed at all for a couple of decades… Cue sci-fi hi-jinks with special effects and action galore, mixed with some deft character-derived humour — the Cornetto trilogy’s usual M.O., in other words.

That’s not a criticism. This is a thematic trilogy, and as such you expect certain elements to be there. No one wants a beat-for-beat rehash, because what’s the point, but there are certain stylistic and tonal elements you want to be present. The World’s End largely achieves that, though not enough for some — those after nought but genre spoofery and non-stop humour may be disappointed.

This is a more mature work than its two predecessors. While they were clever genre mash-up/pastiches, this goes lighter on that crowd-pleasing bumf. There are still generous segments of that in the film, but the genre being manipulated is less clearly defined than 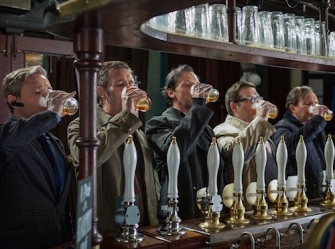 “zombie movie” or “Hollywood action movie”, and occasionally co-writers Pegg and Wright have substituted character development and thematic points for send-up. It may not play to the genre-loving fan-audience that the trio’s previous work has accumulated (demonstrably so, based on many a viewer review), but it does make for a more grown-up film.

I noted that the film is definitely a part of the Cornetto trilogy, but there’s an element of growing up and moving on about it. Shaun of the Dead was made when Pegg and Wright were in their early 30s, but now they’re in their early 40s — a very different time, with different personal concerns. Some people may wish to remain young forever (as per Pegg’s character in the film), but others mature, and it seems Pegg and Wright have more grown-up aims in mind with their filmmaking. In that sense The World’s End may be transitional, from the genre-focussed spoofery of their ‘youth’ to a more considered, perhaps even realistic (at least as far as character and theme are concerned), style of storytelling. Of course, it’s quite meta that the film they’ve made to grow up and move on from the Cornetto trilogy is all about growing up and moving on.

It’s a shame some viewers can’t get on board with this more mature approach. While the consensus appears to be “very good, but definitely the weakest of the trilogy”, there are (normally sane) people who seem to genuinely despise it (what was that I was saying about immaturity again…), and at least a couple who cite it as their favourite of the lot. It’s been a long time since I last watched Shaun or Fuzz so I’m not going to offer my definitive opinion on their relative merits, but I can see that this could be my favourite. 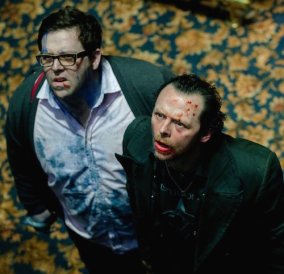 It will definitely reward multiple viewings: it’s littered with signs, omens and portents (in fairness, a good few can be grasped on an attentive first go). There’s a featurette on the BD (but not the DVD) which helps point out any major ones you may’ve missed; though I have to say, even at seven minutes long, and even with it pointing out some that felt too obvious to be worth mentioning, I swear it left some stuff out. That could be a deliberate decision of course, to leave some things for people to just spot.

Clearly too mature for some viewers (and I don’t mean in the sense of swearing and violence), Wright and Pegg’s trilogy-capper is a thoughtful character movie about growing up and moving on… paired with the usual Cornetto trilogy genre-riffing hi-jinks. The result may just be the trilogy’s pinnacle.