The first manned mission to Mars is reaching the end of its six-month tour. As they count down the final hours, battling a dust storm and its attendant power outages and communications blackouts, one of the team secretly discovers bacterial life on the surface. Attempting to recover further samples, a sink hole opens beneath him. When the rest of the crew try to recover his body, it’s not there. Then he arrives back at base… only, he’s not quite himself anymore…

Starting as a sophisticated, plausible vision of what a manned Mars mission might look like in the relatively-near future, The Last Days on Mars attempts an awkward transition into schlocky B-movie horror when Space Zombies turn up about half-an-hour in. Unfortunately, it’s not really trashy enough to work on that level, but equally, it’s not classily written enough to transcend the genre limitations the undead bring. The attempts at a kind of realist sci-fi are to be appreciated, particularly by genre fans who might fancy a change (though in the wake of Gravity, near-future realism may be in vogue), but it doesn’t gel with the often-rote zombie elements. To really succeed it needs a more original threat. These may not be zombies in the “magically brought back to life” sense, but having a semi-scientific explanation for their existence doesn’t negate their storytelling function, which is very trad.

These faults persist despite the best efforts of a quality cast, particularly Romola Garai as (in functional terms) the capable sidekick, and Olivia Williams as the bitch whose heartless practicality becomes an asset when the going gets tough. First-time feature director Ruairí Robinson assembled his cast on the principle of “people who aren’t normally in sci-fi movies”, and that does feed in to the sense of realism. It also looks great, the production, costume and effects designs gelling to create a believable Mars mission, all in spite of a tiny budget (funded by the BFI and the Irish Film Board, it had about a tenth of Gravity’s budget, for example). Credit, too, to cinematographer Robbie Ryan for lensing the Martian surface convincingly (it’s actually the Jordanian desert). The editing may descend into fast-cut blurriness during action scenes — only emphasised by Max Richter’s predictably derivative horror movie score — but during calmer moments the film looks very good.

All things considered, it plays a bit like an R-rated, traditional-zombie-emphasised remake of Doctor Who adventure The Waters of Mars (it’s actually adapted from a 1975 short story, but hey-ho). From the tail end of David Tennant’s time in the role, the award-winning Who episode concerns the first manned mission to Mars battling a previously-undiscovered alien menace that mysteriously turns them into zombie-like creatures and prevents them leaving the planet. And the similarities go further than that, including sequences involving a hydroponic dome, a race down the tunnel that links said dome to the main base, and fears about bringing the deadly virus back to Earth. Thinking through the comparison perhaps enlightens some of where the film goes wrong, as the Who episode had a more effective and original enemy, had more thematic weight to explore (in fairness, concerning Who-specific time travel issues), had characters who were better drawn than the repeated “I’d like to see my kids again” simplicity of the ones here, 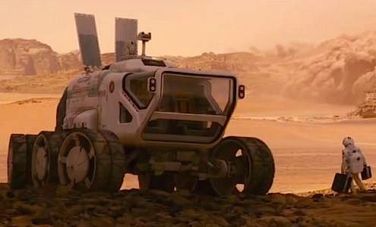 and was more sure of its tone. There may be elements to commend The Last Days of Mars in this comparison (the much bigger budget pays off in the scope of the visuals, of course), but as a story and viewing experience, The Waters of Mars wins hands down.

It’s not just Doctor Who — despite the film’s plus points, most of what The Last Days on Mars has to offer has been done better elsewhere. There are certainly superior zombie thrills to be found. The well-realised plausible Mars mission makes the movie more enticing for sci-fi fans, though your mileage will vary on how much that justifies the investment.

The Last Days on Mars debuts on Sky Movies Premiere today at 10am and 9pm.