Alex Cox was once the director of noticed movies like Repo Man and Sid and Nancy, tipped for Hollywood success. That wasn’t really his style, though, and he wound up heading into ultra-indie territory, ultimately to “microfeatures” — films made so cheaply they fall below the Screen Actors Guild cut-off of $200,000. I confess that the only previous film of his I’ve seen is one of these: Repo Chick, a non-sequel to Repo Man that most people hate but I kinda loved. So when it turned out he was crowdfunding a new film, and a satirical science-fiction comedy at that, I jumped on it (readers with long memories may remember I mentioned it at the time). The finished result finally came out back in December, and… well…

To start at the beginning, Bill the Galactic Hero is an SF comedy novel by Harry Harrison. It’s a spoof of right-wing militaristic sci-fi, specifically Robert Heinlein’s Starship Troopers (which was also lampooned in its own film adaptation (apparently — I’ve still not seen it)). The story sees a lad from a backwater planet, Bill (James Miller), being tricked into joining the intergalactic military, who are locked in a never-ending war with reptilian aliens called Chingers. We follow him through his training, his dispatch aboard a war(space)ship, and adventures beyond. The novel is very good — not packed with gags and perhaps not often laugh-out-loud funny, but consistently wry in its outlook. You can see it would be a tough sell as an adaptation, mind, so an alternative director like Cox is probably the perfect fit. 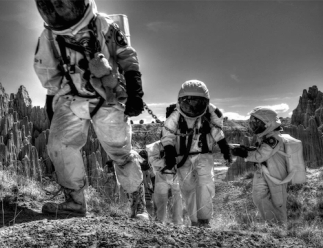 The way he’s gone about filming it is as, essentially, a giant student film. Cox currently teaches film at the University of Colorado at Boulder, and it was along with his students (plus some professional colleagues from previous films) that this movie was produced — that’s partly why there’s the lengthy list of directors (Cox actually directed “most of the first act and all the third”, as discussed in this interview with Quiet Earth). For various legal reasons, it’s a not-for-profit venture; indeed, any venue in the world can acquire a good-enough-to-screen quality copy from Cox for free, so long as it’s being shown in aid of charity. (That, and other interesting points, are discussed in this interview with Boulder Weekly.) The film is also available online, for free, here. This combination of factors (student film; shown only for charity; etc) makes it a little hard to be judgemental about it — witness, for instance, this ‘review’ from Boulder Weekly. But judge we must, and, sadly, in many ways it’s just not very good.

Things start badly with a colourful animated opening. I can see why this was judged to be the most cost-effective way to relate that part of the tale, as it’s set on an alien planet and filled with background extras and future-technology, but considering the amount of cardboard-and-Sellotape set dressing later in the film, surely they could have rustled something up? I also simply don’t like the style of the animation. Its painfully-bright colourfulness provides a contrast to what follows that is nearly appropriate,

but there’s no transition from it into the black-and-white live-action main film, just an abrupt cut (a good place to have put the title credits, at the very least!) Worst of all, no effort whatsoever is made to establish that the cartoon guy we saw being enlisted at the start is now a live-action guy with a teddybear strapped to his spacesuit. It took me a minute to get it, and I’ve read the book.

The cast are kept in full spacesuit gear the whole time. This sounded like a bad idea, and it is. It’s hard to relate to their facelessness, harder still to tell the supporting characters apart. That’s also a flaw of the screenplay and direction, neither of which allow enough time to establish anyone. A lot of the supporting cast are fleeting anyway — as I said, we follow Bill across multiple situations, each with a new group of people around him — but the potential impact of certain scenes involving characters like Eager Beager and Deathwish Drang is lost thanks to the lack of early investment. Even central Bill is lacking in personality or identifiability, particularly so considering he’s the main character. This is in some ways a problem inherited from the novel, where Bill is a blank canvas floating through his various adventures. I don’t know if that was intentional on Harrison’s part, but it didn’t work for me in the book and it doesn’t here either. 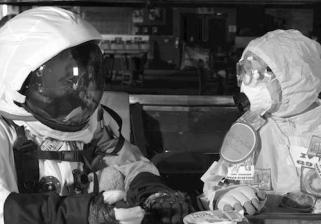 After a hurried start, the film does settle down to slightly longer scenes with more of a point, like Bill’s encounter with the Laundry Officer-cum-Chaplain, and some of these work pretty well. Sadly, too much of the time it’s a race through the novel’s story, feeling like a filmed recap for those who’ve read the book. Goodness knows what someone who hasn’t would make of it all. Goodness knows if they’d even be able to follow it at all, to be frank.

Not all of the adaptation’s ideas are poor, though. The novel was written in 1965, bang in the middle of the Vietnam War. For the film, Cox has substituted the final act’s Vietnam-inspired jungle planet for an era-appropriate Middle East-inspired dustbowl. An ingenious idea, though there’s little (or no) commentary on the past couple of decades of Western military intervention once you get past that obvious observation. Ah well.

The live-action parts (i.e. most of the film) are shot on black-and-white film stock, though I’m not convinced they should have bothered — video would’ve been cheaper, and probably looked much the same in the end. That said, there’s an oppressively dark feel to much of the cinematography, with numerous deep blacks crowding in, which is surely the result of using real film. It’s quite appropriate to the story’s tone, a very dry satire of a controlling future dystopia. Conversely, the special effects look great. They’re the kind of lo-fi models-and-basic-CGI style that I had been expecting, and they nail the intended tone in a way other elements are too amateurish to quite reach.

Unfortunately, the audio quality is quite poor. The spacesuit decision reveals itself to be a bad idea once again when it muffles all the dialogue. Halfway through one character is subtitled, and I’m not sure why — she’s just as clear as everyone else. That is to say, not very; but no one else has subtitles so why does she? Possibly this could all be to do with the film being mixed for 5.1 by people inexperienced in doing so (Cox admitted as much himself) and then poorly downmixed to stereo for the online version that I watched. Perhaps the 5.1 version on the DVD comes over better? (I do have a copy, but haven’t brought myself to watch it to find out.) The end credits scroll under a new song by Iggy Pop, which I actually rather liked.

The sad thing is, I think the film could have been so much better. And I don’t mean by making it ‘properly’, either. Cox has shown he can make microfeatures work, and I don’t believe student films (which this essentially is) are fundamentally meritless. Even the production values, low-rent as they are, are fine if that’s what you’re expecting (and, given the film’s background, you should be). No, the problem lies in the storytelling: a pace that rushes through the novel at such speed that only someone familiar with it could keep up; a lack of time spent establishing characters and situations; rough editing and sound design that obscure elements and, without any breathing room elsewhere, leave you no space to work out the gaps and catch up.

Bill the Galactic Hero might be best described as a noble failure. It’s been created with the best of intentions, both in terms of adapting a quality novel that Hollywood had no interest in, and in training up a new generation of filmmakers in an independent and proactive way. It’s a shame the end result isn’t wholly as enjoyable as it might’ve been.

Bill the Galactic Hero is now available to stream or download, for free, on Vimeo.