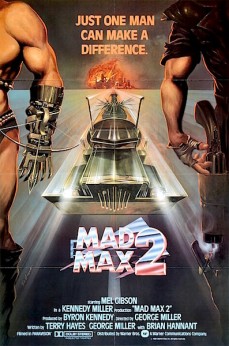 Roaming the outback of a gasoline-desperate post-apocalyptic Australia, “Mad” Max Rockatansky (Mel Gibson) comes across a commune-like oil refinery, whose inhabitants are under siege by a brutally violent gang. Max strikes a bargain: he’ll help them escape with their oil, in exchange for a tank full for himself.

I’m not going to be the first to point out that, in terms of its plot, Mad Max 2 is essentially a Western: a drifter comes across a small community under siege and agrees to defend them purely out of self interest. Of course, the whole “post-apocalyptic wasteland battle for car fuel” isn’t such a traditional genre element. But let’s not get into a debate about whether a film has to be set in the Old West to be considered a Western (though my verdict is it does — flip it around: no one calls The Magnificent Seven a samurai movie because it took its plot from Seven Samurai, do they?) Anyway, the advantage of transplanting the storyline to a new time and place is it makes it feel moderately fresh. There’s an unpredictability to who people will side with and when, which, to be honest, is considerably less unpredictable when you spot the genre parallels.

With such a staple story, the film’s real delights are to be found elsewhere. The design work is first rate, whether that’s the scary bondage-themed gang or the array of vehicles that populate both sides of the conflict. The location allows for some grand scenery — I suppose the oil refinery set is quite modest, really, but place it in the middle of nowhere with cars swarming around it like insects and it looks epic. Without meaning to spoil anything, its ultimate fate is definitely momentous. 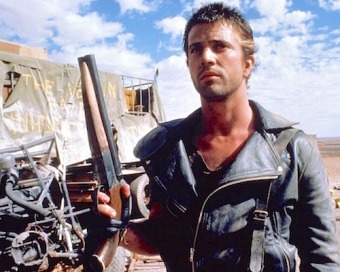 The most memorable part, however, is the climax. They escape the oil refinery, Max driving the tanker — fitted out with weaponry and defences — and the gang give chase. An almighty action sequence follows, a speeding battle through the outback. It feels wrong to just call it “an action sequence”, like that’s selling it short. You get the sense that this is why the movie exists; that co-writer/director George Miller’s goal with the entire rest of the film has been to get us to this point. It’s not just “the climax”, it’s “the third act”, and it’s stunning — the choreography of it, the editing, the stunts, as dozens of vehicles chase each other, people run around on top of them, jump between them… I don’t think it’s hyperbolic to say it must be one of the greatest action sequences ever committed to film. One of the reasons Fury Road looks so good is the trailers seem to suggest it’s this sequence turned into an entire movie, and I’d have no problem with that (maybe that’s just the trailer highlighting the action; either way, even critics love the result).

Mad Max 2 cherry-picks some of the best aspects of Westerns and post-apocalyptic movies, combines them with tightly-constructed, heart-pumping action scenes, and produces a sci-fi-action-Western of the highest, most entertaining calibre. After the first Mad Max, I sort of wondered why the franchise was so beloved. The sequel is the answer.

Mad Max: Fury Road is in UK cinemas from tomorrow.

Mad Max 2 placed 2nd on my list of The Ten Best Films I Saw For the First Time in 2015, which can be read in full here.