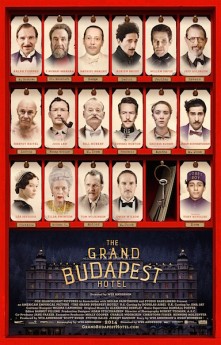 The latest from cult auteur Wes Anderson, which managed that rare feat of enduring from a March release to being an awards season contender, sees the peerless concierge of a magnificent mid-European hotel (Ralph Fiennes) accused of murdering a rich elderly guest (Tilda Swinton, caked in Oscar-winning prosthetics) and attempting to flee across the country to clear his name. More or less, anyway, because this is a Wes Anderson film and so it takes in all kinds of amusing asides, tangents, and recognisable cameos.

The film has the feel of an artisan confection: candy-coloured, precisely designed and constructed, sweetly enjoyable, but with a hidden bite. Something like that, anyway. There are many praises to sing along these lines. The visuals are the most obvious. As is apparent even from the trailer, the shot composition is tightly controlled, squared-off but using that formalism to its advantage in various ways. I don’t know if this is always Anderson’s style (this is only the second of his films that I’ve seen, but it was similarly employed in the other), but here it works in ways almost indefinable.

The performances are just as mannered, and equally as fantastic for similar reasons: they exist within very specific constraints, but then push at their boundaries. Fiennes displays a perhaps-surprising flair for comedy in the lead role. Apparently Johnny Depp was Anderson’s initial choice — thank goodness that didn’t happen! You can completely see Depp in the part, bringing his rote whimsy to it, but how much more entertaining it is to have Serious Actor Ralph Fiennes going somewhat against type, and playing the role beautifully too. A host of familiar faces turn up in supporting roles that display various degrees of individualistic eccentricity, and there’s no weak link, but Fiennes is the stand-out.

I suppose the kooky idiosyncrasies of Anderson’s brand of storytelling and filmmaking will rub some viewers up the wrong way, looking on it all as vacuous affectations signifying nothing. To each their own, but, whatever the merits (or not) of Anderson’s style as a kind of one-man genre played out across his oeuvre, The Grand Budapest Hotel displays a synthesis of contributing elements that creates a movie that’s ceaselessly inventive, surprising, amusing, and entirely entertaining.

The Grand Budapest Hotel placed 10th on my list of The Ten Best Films I Saw For the First Time in 2015, which can be read in full here.