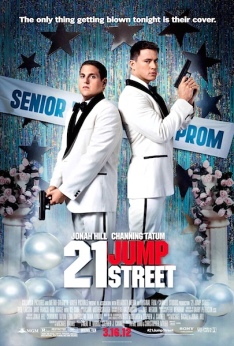 The prime difference from Cloudy with a Chance of Meatballs and The LEGO Movie lies in the rating: those are kids’ films (with adult-friendly angles), while 21 Jump Street is an out-and-out R. That’s unusual in itself, given the US studios’ obsession with PG-13 and this being set in a high school, but it allows Lord and Miller to push at boundaries; not just being able to be ruder and grosser, but even the whole “teens doing drugs” storyline. They manage to make the extremes funny without descending too far into toilet humour — compare it to A Million Ways to Die in the West, for example, which had its share of clever edginess but undermined it with some terribly crass bits.

Perhaps the film’s best material revolves around the changing face of high school. Tatum and Hill’s characters grew up in an era of the traditional mould, where jocks ruled and nerds were bullied. When they return undercover, the tables have turned: getting good grades and caring about the environment is cool. In a classic bit of role reversal,

this leaves Hill hanging out with the cool kids — and being lured down the path of parties and their shallower friendship — while Tatum falls in with a gang of ultra-nerdy nerds and starts actually learning stuff. Distilled like that makes it sound pat, but in the film it works; in part because they don’t overplay the clichéd “friends fall out irretrievably… until it’s retrieved for the final act” story arc.

I only watched 21 Jump Street to see what all the fuss was about, expecting to find it unlikeable and unfunny. Happily, I was completely wrong — Lord and Miller win again. Next, they’re working on an animated Spider-Man movie. At the risk of jinxing it, that sounds likely to be quite good…