“Outnumbered: The Movie” is the pithy way to describe this comedy from writing-directing duo Andy Hamilton and Guy Jenkin (the pair behind the successful BBC sitcom), which sees divorcing parents Doug and Abi (David Tennant and Rosamund Pike) playing happy families when they take their three children to Scotland for the 75th birthday of his dying father (Billy Connolly). Their separation is a secret from the extended family, and who better to keep a secret than three young kids?

It’s hard to miss the Outnumbered parallels early on, as a middle-class London family with two girls and a boy (a mere inversion of the series’ two boys and a girl) battle with the kids’ oddities as they try to load the car for a road trip. There’s a suspicion that Hamilton and Jenkin are returning to their half-improvised TV show’s early glory days, when the natural kids said funny things and the adults had to react. If anything, however, the more Kids Say the Funniest Things: The Sitcom tendencies of early Outnumbered are toned down for this movie, which (like later seasons of the series) is very story-driven much of the time.

This comes particularly to the fore in the second half, following a midway ‘twist’ that threatens to turn the rest of the movie on its head.

For some, the shift may scupper things. For me, it only makes it better: the story’s pathos and emotion are brought into focus, and the humour becomes all the funnier for punching in as tonal relief. It often seems to me that movies struggle to stay amusing for a full feature running time (there’s surely a reason all TV comedy comes in 30 minute chunks), but this story allows Hamilton and Jenkin to spread the laughs out a little without them feeling few or far between.

The three kids aren’t as instantly memorable as Outnumbered’s — there’s no Karen (for my money, one of the greatest sitcom characters ever) — but that’s not to sell their talents short. They may not get the same volume of funny lines, but they’re wonderfully naturalistic and un-stage-school-y. As the eldest, Emilia Jones has the most to do, bridging the gap between the kid-like young pair and actorly adult (much as Jake did on TV, indeed). She’s already been in Doctor Who, Wolf Hall and the fourth Pirates of the Caribbean, and will soon be seen amongst the starry cast of Ben Wheatley’s High-Rise. One to watch? Maybe.

The adult cast are no slouch either, mind. Oscar-nominee Pike is the headline now the film’s being released in the US, with the always-popular Tennant joining her as the other nominal lead. Arguably they’re the straight men to both the kids and the array of comedy actors in supporting roles, 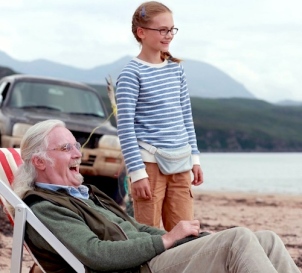 including the likes of Ben Miller, Amelia Bullmore (getting the best subplot), Annette Crosbie and Celia Imrie. The real grown-up star, however, is Connolly. You get the sense he’s as scriptless as the kids are, improvising away with a mischievous twinkle in his eye, like some kind of idealised fun granddad. The scenes with just him and the kids are certainly one of the highlights, among the most amusing and the most affecting.

I wouldn’t have really objected if What We Did on Our Holiday had no higher aims than being Outnumbered: The Movie, though trying to recapture the alchemical comedy gold of the series’ early days may well have been a hiding to nothing. Hamilton and Jenkin are on a slightly different tack here, however, even if fans of the series may find it’s a variation on a theme. It’s a theme that stands repeating though, and by mixing in musings on loss and change and how, sometimes, the innocence of kids is more grown-up than the formality of adults, the writer-directors find enough to make their feature debut stand on its own merits.

What We Did on Our Holiday is released in US theaters tomorrow, and is available via all the usual home entertainment choices in the UK.