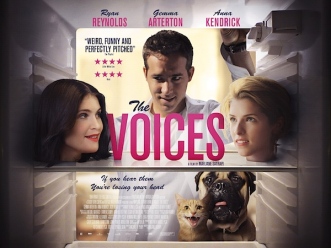 Jerry (Ryan Reynolds) is a nice guy living in the small town of Milton, working in shipping at Milton Fixtures and Fawcetts, where he fancies the English girl in accounts, Fiona (Gemma Arterton), and doesn’t notice how much another girl in accounts, Lisa (Anna Kendrick), likes him. He also talks to his dog, Bosco, and cat, Mr Whiskers, and they talk back. That’s why his psychiatrist (Jacki Weaver) encourages him to take his medication, but he doesn’t. When he accidentally murders Fiona (as you do), it’s Mr Whiskers that encourages him to cover up the crime.

The Voices isn’t your usual kind of film — obviously. In the special features, everyone’s very keen to talk about how it exists outside of genre, and they’re right. From some of the premise (his pets talk!) and marketing, you’d be forgiven for thinking it was just a comedy. It is a comedy, but a very black one. A very, very black one. A total-absence-of-light black one. The laughs do not come thick and fast, though there are some, and there’s a left-of-centre worldview that is comedy-quirky — if you tried to play this entirely straight, it wouldn’t work.

However, it is also something of a psychological crime thriller. Jerry is clearly a very messed up individual, and so we’re always wondering what he will do next,

what happened in his past to make him this way (flashbacks and hints are scattered, leading to an eventual reveal), and how will it all end for him? We’re conflicted here, because he’s a nice guy who we like, but he’s also a murderer, in horrific fashion, and so surely justice is due. Screenwriter Michael R. Perry and director Marjane Satrapi (of Persepolis fame) tread a fine line here: they do want us to like Jerry, but are certainly aware that can be an uphill struggle given what he’s done.

They’re aided in no small part by Ryan Reynolds’ first-class performance. Reynolds has coasted along in minor, generic, average-to-below-average action-thrillers (Smokin’ Aces, Safe House), rom-coms (Just Friends, The Proposal), and, mainly, comic book movies (Blade: Trinity, X-Men Origins: Wolverine, Green Lantern, R.I.P.D.), but a couple of more recent performances seem to have shown his range. Firstly, Buried (which I’ve still not seen), where he carries the film trapped alone in a box, and now this. And last weekend’s Comic-Con trailer for Deadpool, which looks like it might be awesome. Here, he essays a multitude of characters: working on the theory that the voices are all in Jerry’s head, Reynolds voices Bosco, Mr Whiskers, and a couple of other animals to boot. This isn’t just an affectation: he gives different performances as each, offering a kinda-dim but good-hearted Southern gent as Bosco the dog, and an evil bloodthirsty Scot as Mr Whiskers the cat. The dog is good and the cat is evil? Sounds about right. That’s not to undersell his main performance, in person as Jerry, a socially awkward guy who really does want to do the right thing, but can’t help being led astray.

Able support comes in the form of three women in Jerry’s life. Gemma Arterton has a ball, first as a bit of a bitch, then as a ludicrously-chipper super-English talking head. Anna Kendrick, meanwhile, is sweet and likeable, and while we may be on Jerry’ side when he accidentally slides his knife into Fiona, we’re keen for him not to make the same mistake with Lisa. Whether he does or not is where the real battle for his sanity lies. The third is Jacki Weaver’s psychiatrist, who is central to the climax but also has the least to do of all three, really. Never mind.

Satrapi delivers a film of mixed tones, which clearly doesn’t work for every viewer, but I thought handled the shifting styles well. There’s a kind of kooky comedy to it all, but also horror movie-level disgust at points, and the complex psychology underpinning Jerry’s actions. I thought all three were mixed well, though I can see why it’s not to everyone’s taste to have such apparently-disparate genres co-existing; certainly, the darkness of the humour will be beyond some. DP Maxime Alexandre nails the visuals for all this, though. Off his drugs and in his delusions, Jerry’s world is perfect and sunny, but the cleverness here is that it isn’t beyond the realms of reality, it’s just a bright, sunny, polished, happy reality. When he takes his meds, the dark, grey, grim, hoardersome, blood-soaked, shit-stained reality of his life comes in — and his two best friends look really miserable and stop talking to him. No wonder he’s tempted to the dark side. Alexandre has form in horror movies (The Hills Have Eyes, The Crazies, Silent Hill: Revelation), so no wonder he can do the latter, but the majority of the film is on the shiny side, and he’s got that down pat too. 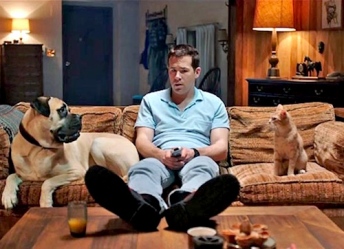 The Voices is the kind of film you say is “not for everyone”, which are often the best kind if they are for you. For me, it wasn’t quite funny enough — I’d’ve liked more of the dog and cat, who get the lion’s share of the best material. I also felt that Jerry’s backstory, the reasons for why he is how he is and does what he does, weren’t explored quite enough. The Blu-ray’s deleted scenes hint at more of this, particularly with an alternate climax, which was perhaps cut because there was too little material specifically building up to it. Rather than losing that ending, it would’ve been better to keep it and find more scenes that contributed to it.

And talking of the ending, I haven’t even mentioned the finale! The more out of the blue it comes the better, I think, so I shall say no more. As a capper on everything, though, it’s darn near perfect.

The Voices is not an unqualified success, then, but it’s one of the more unusual films I’ve seen in a while, with a good few appreciable qualities, and I enjoy that. Recommended with caution.