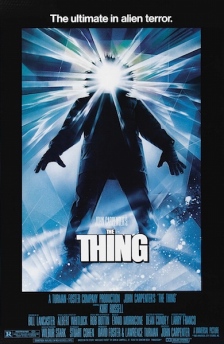 It’s just an ordinary day at the US Antarctic research base staffed by helicopter pilot MacReady (Kurt Russell) and his compatriots, until a helicopter buzzes overhead dropping grenades on a dog it’s pursued across the ice fields. The dog finds sanctuary in the US base; the helicopter and its crew are less fortunate. Realising it’s from a Norwegian facility an hour’s flight away, MacReady and the doctor brave inclement conditions to investigate. They find numerous corpses and the base burnt to ruins. What horrors befell the Norwegian base? And have they inadvertently brought them into their own…?

I think we all know the answer to that second question. It wouldn’t be much of a movie if the answer was, “nope, they’re good.”

Derided by some on its release for being naught but wall-to-wall gore, The Thing naturally developed a cult following among horror/sci-fi fans. The funny thing watching it today is that, while the special effects still retain the power to shock in their gross extremity, they’re limited to a handful of quick-fire sequences; indeed, those seeking out The Thing to get their blood-and-guts fix nowadays often seem to declare it “boring”.

Naturally, they’re missing the point. At its heart, John Carpenter’s film is a psychological thriller: an alien is in the group’s midst; it has taken on the form of one or more of them; who can you trust? How can you tell? It’s both a dilemma in an abstract “sci-fi concept” sense, and no doubt a parallel from an era when spying and the threat of ‘the other’ infiltrating society were still major issues. I suppose it’s a facet that’s come round again these past few years, with the increasing rise of home-grown terrorists, previously decent citizens lured and brainwashed by propaganda. The most enduring themes are always timely, I guess. 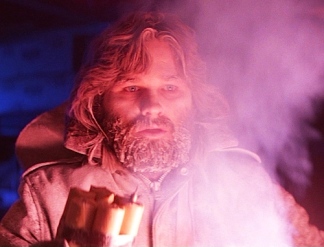 Even if you don’t want to get deep about it, The Thing has the “who’s human?” thrills to keep you engaged on that level. Accusations of boredom no doubt stem from the fact it’s a bit of a slow burn, the early acts building suspicion and unease as MacReady and co investigate. Even after the true nature of the threat is revealed, Carpenter paces himself, though the frequency of incidents begins to mount inexorably as we head towards the climax. Well, that’s just good structure.

If the film has one problem, it’s there are too many characters. We know MacReady: he’s Kurt Russell, and he’s singled out early on as the hero — though we come to suspect even he may not be ‘right’ as the film goes on. As for the rest, I believe there are eleven of them, and at best they are loosely sketched. At least a couple are easily conflated and therefore confused, and for the rest, there just isn’t time to get to know them properly, so we’re less invested in what happens to them. There’s a reason most “who will survive?” movies have something like five or six characters in peril, not twelve.

In spite of all that, The Thing does remain best remembered for its extraordinary effects. Even though you know it’s rubber and silicon and corn syrup and whatever else, and even though the intervening thirty-odd years and lashings of CGI have enabled even more, even darker imaginings to be brought before our eyes, the visceral physicality of these effects, the way they play on long-established fears, and apply those to the human body in nauseatingly contorted ways, is plenty enough to render them still effective; certainly so within the context of a film that is, as I say, really more of a thriller than a gore-fest. 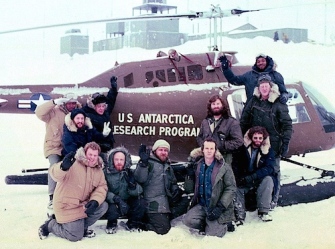 For me, it’s the psychological quandaries that are gripping and exciting, rather than any enjoyed disgust at the emetic special effects. However, knowing the characters a little better — thus caring if they’d been replaced or not, and also perhaps allowing us a chance to try to guess for ourselves — would have just made it that bit superior.

The Thing was viewed as part of my What Do You Mean You Haven’t Seen…? 2015 project, which you can read more about here.

The 2011 prequel, also titled The Thing, will be reviewed tomorrow.