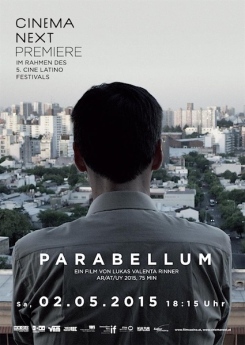 Screened at the London Film Festival earlier this month, then made available on MUBI in the UK (where you can, if you want, watch it until midnight on 11th November), the latter lured me in by describing it as “a meticulous and immersive portrait of the end of the world, where the apocalypse is out of frame. Who said sci-fi required big budgets? Clever, and chilling.” Intrigued? Don’t be.

Parabellum (which apparently translates as “Congratulation”, though that doesn’t seem to mean anything here) is the kind of movie where nothing much happens. Well, things do happen, but co-writer/director Lukas Valenta Rinner has chosen to tell the story in such a way that it feels like nothing happens. A bunch of people gather at a remote survivalist training camp in Argentina, where they’re taught things like camouflage, hand-to-hand combat, and shooting. We don’t see them talk to each other; we only see snippets of their lessons; no one explains why they’re there, what’s going on in the wider world to have inspired them to come, or anything else.

After over half an hour of this, we see what appears to be a comet, but may be a missile or something, fall in the background of a shot. Is this the end of the world, then? Suddenly, the instructors don’t seem to be around anymore, and half-a-dozen of the trainees set off by boat to… well, I’m not sure what their goal is, but they break into someone’s house and kill him, and later they migrate to a bigger boat and continue travelling; and then one of them commits suicide, and eventually the guy we’ve ‘followed’ from the start sets off in a small boat towards a distant city, where numerous comet-missiles are raining down non-stop. 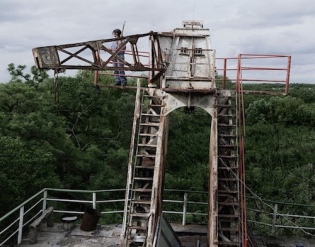 That’s the whole movie, more or less. I haven’t spoiled it for you because you’re not going to watch it because why would you? There is no discernible story or meaning; there is no characterisation; there is nothing but imagery and snippets of moments that signify nothing. It is a movie that has deliberately left out any explanations. Apparently the director has said it’s all a criticism of global capitalism, or something. Even with that extra-filmic information, it’s still difficult to ascertain much meaning. This isn’t realism — this isn’t avoiding “hello, person who is my brother” dialogue — this is obtuseness for obtuseness’ sake.

Alfred Hitchcock once said that “movies are real life with the boring parts cut out.” Valenta Rinner’s movie is the opposite of this in every respect: it isn’t real life, which is fine, but he only left the boring parts in, which isn’t.

Parabellum is, as noted, part of MUBI’s UK selection until midnight on 11th November.

It featured on my list of The Five Worst Films I Saw in 2015, which can be read in full here.