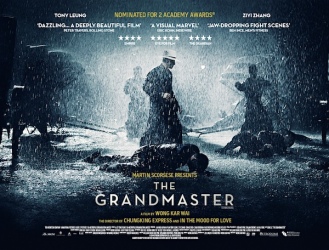 As a Western viewer, if you know anything about Ip Man beyond “he’s the chap who trained Bruce Lee”, it’s probably thanks to the pair of eponymous biopics starring Donnie Yen (soon to become a trilogy). Heck, if you know that much there’s a fair chance it’s due to those films. This take on the man, directed and co-written by Wong Kar Wai and starring Tony Leung as Ip, is tonally very different.

Some of the facts remain the same, naturally: Ip is a master of Wing Chung in Foshan, China, until the Japanese occupation ruins everyone’s lives. Post-war, he moves to Hong Kong and sets up a school there. Concurrently, there’s something about being the grandmaster of martial arts in all of China, or somesuch. When the previous incumbent is murdered by his disciple, the old man’s daughter, Gong Er (Ziyi Zhang), has revenge in mind.

The Grandmaster is very much more an arthouse version of the story than the Ip Mans’ accessible action-movie stylistics, with elliptical storytelling and a carefully-measured pace, even in the action sequences. I’ve seen at least one review criticise Wong for leaning too heavily into ‘genre’ pictures — I guess that critic doesn’t actually watch too many genre pictures, because a good number of genre fans criticise this for being too arty. It is more “arty” than “genre”, even given its inclusion of numerous fantastic fight scenes. The duels are stunning, though pure adrenaline-junkie viewers seem to find even those a disappointment. Well, they’re wrong. 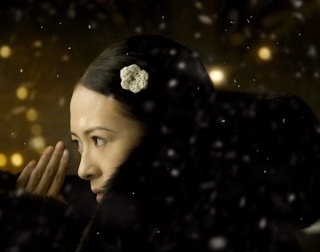 One factor that may — or, as we will see, may not — have an effect on how the film fares beyond the purely visual is that there are at least three different cuts: a 130-minute original cut, a 122-minute international cut, and the 108-minute version released in the US by the Weinsten Company. “Ah,” you might think, “yet another Weinstein hack job.” Well, Wong himself says otherwise:

As a filmmaker, let me say that the luxury of creating a new cut for U.S. audiences was the opportunity to reshape it into something different than what I began with — a chance one doesn’t always get as a director and an undertaking much more meaningful than simply making something shorter or longer. The original version of The Grandmaster is about 2 hours, 10 minutes. Why not 2 hours, 9 minutes or 2 hours, 11 minutes? To me, the structure of a movie is like a clock or a prized watch — it’s about precision and perfect balance.

We always knew that we wanted to have a U.S. version that was a bit tighter and that helped clarify the complex historical context of this particular era in Chinese history, focusing further on the journeys of Ip Man and Gong Er. While the previous version was more chronological, adding narration and captions to explain certain plot points gave us the freedom to bring more life to moments in the characters’ stories. I also aimed to enhance the audience’s understanding of the challenges faced between North and South, especially during the Japanese invasion.

Well, the narration and explanatory title cards are at times useful, but at others feel heavy-handed. I guess that’s the result of them being added retroactively as an explanatory device — if Wong had felt that information needed to be in the film throughout production, I’m sure it could’ve been better integrated into the storytelling.

However you look at it, the other Ip Man films are undoubtedly more palatable to a mainstream audience. Does that mean they’re worse? No. Better? Not necessarily. But I don’t think The Grandmaster is all it could’ve been. It seems to run out of story and lose its way as it gets towards the end. The focus shifts entirely to Gong Er, and it feels less clear what it’s meant to about as a whole film. It becomes a movie of great moments, and maybe even scenes, but an unsatisfying whole. But oh, the images…