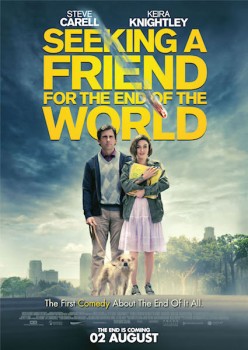 This melancholic apocalyptic comedy wasn’t too well received, which is a shame because I thought it was absolutely brilliant.

As an asteroid heads inevitably towards Earth, Steve Carell decides to go on a road trip to reconnect with his high school sweetheart. Neighbour Keira Knightley tags along. Quirky things happen; they bond; as the end of the world nears, they rethink their lives.

Carell gives a very good performance, trading in the kind of understatement that makes him a much more interesting actor than his stock-in-trade outrageous comedies continue to imply. I guess Knightley is playing a Manic Pixie Dream Girl, at least to an extent, but I thought she was a plausible character nonetheless. There are certainly more egregious examples of the trope. It’s another strong performance, anyway, containing a lot more truth than your average MPDG.

The thing both leads nail, as does writer-director Lorene Scafaria, and what made the film so good for me,

is an overwhelming sense of melancholy. It’s a hard feeling for films to evoke, I think — more complex than happiness or sadness, or excitement, or even fear. It comes to a head in an ending that actually brought a tear to my eye, a rare enough feat that it cemented a five-star rating.

Seeking a Friend for the End of the World placed 11th on my list of The 20 Best Films I Saw For the First Time in 2015, which can be read in full here.