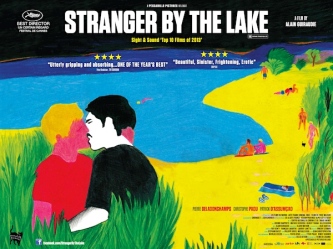 I’m just going to mention that before it comes the elephant in the room: this movie features lots of ultra-explicit gay sex. If you catch it on TV, that stuff’s been partially removed (the BBFC may’ve passed it as an 18, but it remains illegal to show so much detail on TV, even at 1:20am when Channel 4 aired it), so even if I wanted to I won’t be discussing that aspect in detail. Still, even without the, er, money shots, the sex is more frank than you normally see. It’s also set on an all-male nudist beach, so even when they’re not at it there’s plenty of flesh to go round. If that kind of thing bothers you, this is certainly a film to steer clear of.

For the less prudish, it’s worth getting past the initial titillation, because pornography isn’t the point. Rather, it’s an intriguing dramatic thriller about what we’re prepared to accept, risk, or ignore in the name of attraction: Franck (Pierre Deladonchamps) fancies Michel (Christophe Paou), then spies him murder his former lover (in an extraordinary long, unbroken take), and then enters into a relationship with him anyway. This exploration plays out through a slow-burn pace, which balances burgeoning romance with an almost casual, incidental attitude to the thriller elements. It works thanks to our investment in the characters, their relationships (both sexual and friendships), and how these feed and influence the storyline. 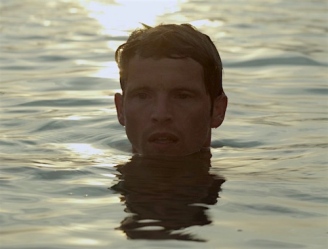 In this regard it has a very particular speed and style — even if there was a version without copious full-frontal male nudity and explicit sex, it still wouldn’t be for everyone. It helps to evoke both a certain time and place (lazy summer days on holiday) and a particular lifestyle (that of gay cruising — which, much to the (presumably straight) policeman’s bafflement, continues virtually unabated even after one of their number is murdered in unexplained circumstances). This is further emphasised by the gorgeous cinematography. Claire Mathon apparently shot it using only natural light, and it looks fantastic — understated (this isn’t a heavily-graded hyper-real kind of beauty), but sumptuous.

The film never leaves its lakeside beach setting. That’s interesting for several reasons. One, it might seem like a limiting move, but isn’t — the beach is where the main action occurs, so why leave? Two, the story is about that aspect of these people’s lives — so that focus probably makes the film stronger. But, three, the characters’ lives do exist outside of this place. Franck gets drinks with friends from the beach; he has dinner with new acquaintance Henri (Patrick D’Assumçao) at least once, and misses an arranged meal at least one more time; he’s even interviewed at the police station, which you’d think would be vital to the plot. But we don’t see any of that. We learn about it when it’s arranged or after it’s occurred, from conversations at the lake. It’s an interesting choice; one that creates a particular kind of focus, and some sort of unity of space and time. It would give the movie a very different feel (though no less valid) if we actually saw those other encounters on screen. 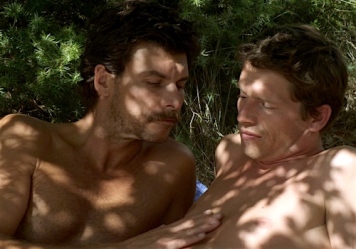 The style is supported by strong performances. I suppose some would say “brave”, by which they’d mean “they’re naked a lot and having gay sex”… so, I mean, maybe it is brave, but, still, that’d be a euphemistic description. What I mean is that they’re strong because they’re calm, understated, realistic, and believable without tipping over into amateurish. You feel Franck’s complex mix of fear and excitement, his lust overpowering common sense; there’s a certain timidity, maybe even naïvety, present in his eyes. Conversely, his lover Michel is unreadable; a closed book, where you never know what he’s thinking, feeling… plotting. Franck’s new friend Henri is similarly tricky to get an accurate handle on, but he’s the yin to Michel’s yang (or vice versa). He’s not plotting, he just is. Or maybe he was plotting all along…?