Widely regard as one of (if not the) greatest kung fu movies ever made, The 36th Chamber of Shaolin introduces us to San Te (Gordon Liu), a student whose hometown is oppressed by forces of the ruling Qing dynasty. He and his classmates join the underground resistance run by his teacher, only to wind up witnessing his friends and mentors be hunted, tortured, and killed. Faced with a similar fate, San Te escapes to the Shaolin Temple, widely known for being home to the best kung fu around. The temple’s monks refuse to teach martial arts to normal folk, nor help by joining the fight — they’re Buddhists, after all. Nonetheless, San Te manages to inveigle his way in to their company, and years of training begin.

Said training — where San Te must progress through the Shaolin Temple’s 35 (not 36) chambers one by one — makes up the bulk of the film, though there are lengthy bookends dealing with the reason he goes there in the first place and what he later does with that training. If the notion of watching chamber after chamber after chamber (times 35) sounds dull, don’t worry, we only actually see ten of them, and several of those via an extended montage. The chambers take the form of challenges, which San Te must overcome by either puzzling them out or developing some kind of physical or mental acuity. Their content is varied and innovative, which makes them engrossing to watch even as they make the film episodic, but the nature of the challenges makes the movie different from the usual fight-after-fight-after-fight structure of kung fu flicks.

If it’s combat you want, though, never fear: everybody is kung fu fighting at regular intervals. Displays of physical skill and speed are de rigueur for these kind of films, but the combat here is as impressive as any. While the initial training takes the form of tangentially-related skills tests, 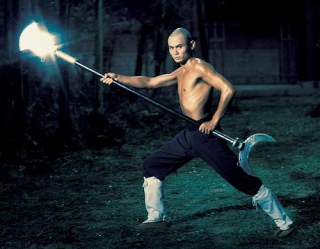 San Te is eventually learning how to use weapons, and when he finally graduates from the 35th chamber he has to prove himself in combat, first against the temple’s justice, then when he returns to the outside world and seeks vengeance. Fights both with and without weapons are imaginatively choreographed and executed with the customary speed and precision.

Much as you won’t enjoy many a musical if you can’t accept people just bursting into song, you won’t enjoy many a kung fu movie if you can’t accept a story told primarily through back-to-back action sequences. The 36th Chamber of Shaolin is more-or-less that kind of movie, though the differing styles of the chambers’ challenges bring pleasing variety. Is it the greatest kung fu film of all time? I’m no expert, but it’s certainly inventive, masterfully performed, and suitably different from any such movie I’ve yet seen.

The 36th Chamber of Shaolin is on Film4 tonight at 10:55pm. It kicks off a short season of martial arts movies — more details here.