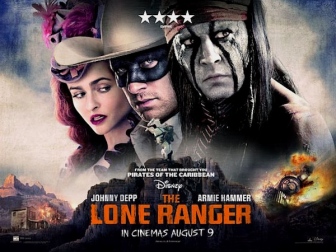 Hated by Americans and loved (well, ok, “liked”) by everyone else (well, ok, “by lots, but by no means all, of people who reside outside America”), Disney’s attempt to pull a Pirates of the Caribbean on Western adventure IP The Lone Ranger is by no means as successful as the first instalment in their piratical franchise, but is at least the equal of its sequels — and, in some cases, their better.

The convoluted plot sees us arrive with John Reid (Armie Hammer) in the frontier town where he grew up, where his brother Dan (James Badge Dale) is now sheriff. Construction of the railroad is running by the town, spearheaded by Latham Cole (Tom Wilkinson), who letches after Dan’s wife (Ruth Wilson); but work is plagued by a band of outlaws led by Butch Cavendish (William Fichtner). Receiving information on his whereabouts, Dan rounds up a posse and heads out to tackle him, with John insisting on tagging along. Unfortunately it’s an ambush and they’re all slaughtered (oh dear)… except John just about survives, and is found and nursed back to life by a Native American, Tonto (Johnny Depp). He has his own grievances, and together they set out on a mission of revenge.

And if you’re wondering where Helena Bonham Carter is in all that: despite her prominence on many of the posters, her role is really just a cameo. That’s marketing, folks. 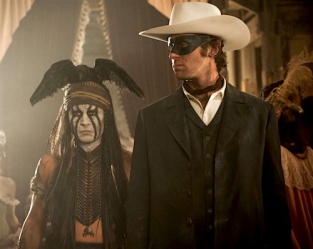 I know some people complain about simplistic stories that are used to just string action sequences together, and that’s a perfectly valid thing to get annoyed about, but The Lone Ranger swings to the other extreme and uses an over-complicated story to string together its action sequences. All it actually needs is a little streamlining, because the film is allowed to swing off into too many sideplots. This makes the middle of the film a slog, and you feel every minute of its excessive two-and-a-half-hour running time.

That slog is made worthwhile by what comes before and after said middle: a pair of train-based action sequences that are each truly fantastic. The second, in particular, is arguably amongst the grandest climaxes ever put on screen (providing you don’t feel it’s tipped too far into being overblown, of course). It’s inventively choreographed, fluidly shot, and perfectly scored with just an extended barnstorming version of the Lone Ranger’s theme music (aka the William Tell Overture). It’s an adrenaline-pumping action sequence that single-handedly justifies the entire film’s existence, if you’re into that kind of thing.

With multiple trains, horses, actors, guns, stunts, and copious CGI to tie it together, that sequence must’ve cost a bomb. Notoriously, the whole film was deemed too expensive and Disney insisted the budget be slashed, resulting in delays… and it still cost a fortune. That, quite apart from the negative critical response in the US, is a big part of why it flopped at the box office — 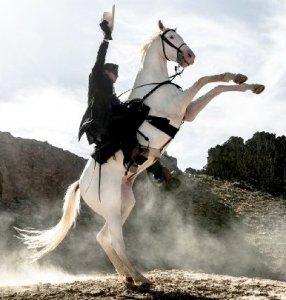 a recurring problem for Disney at the minute. To be frank, I’m not convinced anyone made a truly concerted effort to stem the overspend. When a gaggle of CG rabbits hopped on screen, all I could think was, “who allowed this?!” You’ve got a massively over-budgeted film that the studio want cut back, and one reason for that is CG bunnies that have almost no bearing on anything whatsoever! The amount of time and effort that must’ve gone into creating those fairly-realistic rabbits for such a short amount of screen time… it cost millions, surely. Millions that could’ve been saved with a simple snip during the writing stage if only someone had said, “well, those bunnies don’t add anything and they’ll be bloody expensive, so let’s lose them.”

So criticism is not unfounded, but the film doesn’t deserve the level of vitriolic scorn poured on it by the US press and, consequently, public. Discussing this, the “critical response” section on the film’s Wikipedia page is interesting, and this part pretty much nails it:

Mark Hughes of Forbes, analyzing what he felt was a “flop-hungry” press desiring to “control the narrative and render the outcome they insisted was unavoidable” for a highly expensive movie with much-publicized production troubles, found the film “about a hundred times better than you think it is … [a] well-written, well-acted, superbly directed adventure story.” 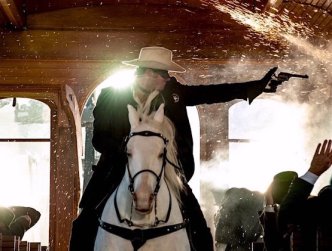 I’m not quite as effusive as Hughes, but The Lone Ranger is worth the time of anyone who enjoys an action-adventure blockbuster. It’s a three-star adventure-comedy bookended by a pair of five-star railroad action sequences, which make the trudge through the film’s middle hour-or-so feel worthwhile. There was a better movie to be made here — one that was half-an-hour shorter, more focused, and probably several tens of millions of dollars cheaper to make — but that doesn’t mean the one we got is meritless.