Yesterday I wrote about Predestination, a twisty sci-fi thriller in which I guessed all the twists long before the end, but it didn’t matter because the film had more to offer. Today I find myself in the same situation: Prisoners is a thriller (though not of the sci-fi variety) centred around some mysteries that lead to big twists, all of which I guessed with complete accuracy about one-third of the way through.* I don’t say this to boast — well, I do a little — but my other point is this: while it proved a bit of a distraction, occasionally feeling like I was sitting through aimless red herrings as I waited to be proved right, there’s more to Prisoners than just OMG moments.

We set our scene on Thanksgiving in the small, slightly rundown Pennsylvania city of Conyers, where the Dover and Birch families gather for the traditional lunch at the latter’s house. As things transpire, they can’t find their two little girls, and a suspicious RV parked down the street has disappeared. Fearing the worst, they call the police, who track down the RV and its driver, an adult with the mental capacity of a ten-year-old. The girls are nowhere to be found. He’s the obvious suspect, but he couldn’t’ve taken them… could he? As Detective Loki (Jake Gyllenhaal) pursues an increasingly complex investigation, unsatisfied Dover patriarch Keller (Hugh Jackman) thinks he might need to take matters into his own hands… 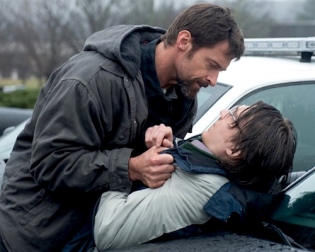 There’s a lot going on in Prisoners. While the basic format is straightforward, it’s realised in the form of a multi-stranded narrative full of well-drawn characters with complications of their own. Jackman and Gyllenhaal may be top billed and on the poster (well, an air-brushed waxwork vague approximation of Jackman was on the poster), but there’s actually a powerful ensemble cast here, and it’s their performances that help the film to stand out from the thriller crowd — as well as to overcome the fact I guessed all the twists.

So we have: Maria Bello as Grace Dover, who begins to crack under the mental pressure of her daughter’s disappearance. Terrence Howard as Franklin Birch, who, based on their houses, is clearly in a better financial situation than Keller, but is he man enough to help Keller do what he feels needs doing? His wife, Nancy, played by Viola Davis, may at first suggest a fragility to match Grace’s, but it soon becomes clear she wears the trousers in this marriage. As mentally stunted suspect Alex Jones, Paul Dano gives a well-managed dialogue-light performance, not straying into caricature. The aunt who raised him, Holly, played by Melissa Leo, is protective, but also doesn’t seem all that shocked by the accusations levelled against him.

Then we do have our two leads. I think Gyllenhaal’s Det. Loki may be supposed to come across as a first-rate cop — he’s certainly so good that he can tear his Captain a new one about not doing stuff properly and not get a dressing-down for it — but he struck me as a little less than ideal. I mean, he’s effectively a small-town cop suddenly stuck in a child-kidnapping (and possibly murder) case — of course he should be out of his depth.

He’s not a bad detective, just not the usual genius-level investigator you normally find in thrillers, and at times you feel he’s muddling his way through the investigation as best he can. Aside from giving Loki the slightly-affected tic of blinking too much, Gyllenhaal offers a reasonably restrained performance. (I’d love to know what the blinking was in aid of, but the film is woefully understocked with special features.)

Jackman gets a showier turn as Keller Dover, the dad who prides himself on being a strong, capable, prepared-for-anything kinda guy. This is partly a value his father instilled in him, he tells his son, but you have to think there’s an element of it being a response to the emasculation of not being able to fully provide for his family — there’s not much work around, he mentions, and their home environment clearly isn’t as well-appointed as the Birches’. He does have a basement full of survivalist gear, though, and we first meet him coaxing his son into shooting his first deer. This is a man ready to do what he feels is necessary, and what he feels is necessary takes him — and, by association, several of the other characters, and indeed the whole film — to some dark places.

Not that the film needs any help accessing dark places. The truth behind what’s happened to the girls is very dark indeed… though that would be spoiler territory. I thought it was a good solution, even if I did guess it so early on, but I’ve seen others suggest it’s too neat. I dunno, but I think it’s come to something when a film answering all its questions and explaining all its threads is seen as a bad thing.

Denis Villeneuve’s direction gives the sense of a non-Hollywood background with the occasional arty shot choice or composition, though not to a distracting extent. He’s aided by serial Oscar loser Roger Deakins on DP duty, who once again demonstrates why he shouldn’t have a golden man already, he should have a cupboard full. The photography here doesn’t flaunt itself with hyper-grading or endless visual trickery, but is consistently rich and varied. Deakins may also be the best action cinematographer working — pair what he brought to Skyfall with a climactic car dash here and you have a more impressive action demo reel than you’d expect from the kind of guy who has multiple Oscar nominations to his name.

In the end, I find it a little hard to succinctly assess Prisoners. We have a film of complex characters brought to life with vivid performances, though the latter are not adverse to an element of grandstanding, and some of their actions slip into genre familiarity. So too the narrative, which for all its twists and turns isn’t a world away from any number of airport-bookstore doorstop thrillers — and that length is certainly mirrored in the two-and-a-half-hour running time. The fact that I was waiting for my predictions to be confirmed also colours my perception somewhat, because while I don’t think the film completely leans on its twists, it was a bit of a distraction. Nonetheless, you can’t deny the quality of the moviemaking, particularly Villeneuve’s sweeping direction and Deakins’ rich cinematography. 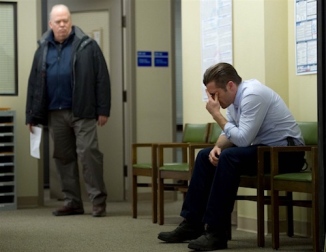 As a thriller that is also a drama about people caught up in those events, and the lengths to which some of them may be prepared to go, Prisoners is a must-see for anyone with the stomach for some dark material (though don’t let me overemphasise that point — it’s not as bleak as, say, Se7en). Is it a classic in its own right, though? Not sure. But it is very, very good.

The UK network premiere of Prisoners is on Channel 4 tonight at 9pm.

* For those playing along at home: the precise moment I got it (explained in non-spoilery terms) was when Det. Loki visits an old lady and watches a VHS. ^