In the seven-and-a-bit years between 31st March 1939 and 7th June 1946, there were a total of 14 films released starring Basil Rathbone and Nigel Bruce as Sherlock Holmes and Dr Watson. By coincidence rather than design, I’ve spent nearly eight years viewing and reviewing them all for this blog — so yes, it’s taken me a little longer to watch them than it did to make them, which is ridiculous, but there you go.

This final film in the series sees Holmes in pursuit of a criminal gang who are on the trail of three music boxes, and are prepared to kill to acquire them. The boxes were all made by a prisoner and contain coded messages which, when combined and decoded, will reveal the location of stolen Bank of England printing plates — a literal licence to print money. Well, apart from the licence bit, because it would be illegal. But you get what I mean.

The Rathbone Holmes series was only sporadically adapted from the writings of Sir Arthur Conan Doyle, but this entry takes loose inspiration from several tales. The use of secret codes is reminiscent of The Dancing Men (previously the basis for The Secret Weapon), while the plot device of having to track down multiple identical items that hide something comes from The Six Napoleons (previously the basis for The Pearl of Death). I don’t know if that suggests there are only a few Doyle tales actually worth adapting, or if the makers of the series were running out of fresh ideas by this point.

There are also elements of A Scandal in Bohemia, the story most famous for featuring Irene Adler, aka The Woman, but screenwriters Frank Gruber and Leonard Lee have an unusual method of including it: 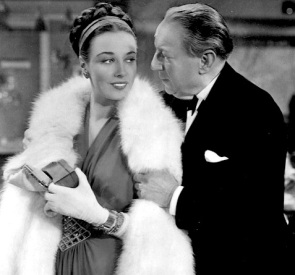 the story is explicitly referenced in the film, Watson having just had it published; then the film’s villainess turns up, played by Patricia Morison, functioning effectively as an Adler stand-in — and using some tricks she learnt from reading Watson’s story! The series hasn’t featured Adler before, so why not just name this character Irene Adler, have her devise those tricks from her own imagination, and be done with? Who knows.

Dressed to Kill is an ending to the Rathbone/Bruce films only in the sense that it’s the last one, this not being an era of “series finales” or what have you. It isn’t among the top tier of Holmes adventures starring the pair, but it’s still an entertaining mystery. In some respects that’s a good summation of the series, and why they’ve endured in popularity for over 75 years: even when not at their very best, they remain enjoyable.