A British sci-fi movie from a first-time director will tomorrow take a place at the table (well, in the auditorium) alongside 2015’s biggest awards contenders, as it vies for multiple gongs at this year’s BAFTAs — and it stands a very plausible chance of walking away with several of them, too. I hope it does, because, after a year that brought us awards-quality sci-fi bombast (Mad Max, Star Wars), it’s fantastic that a small film about three people sat in rooms talking can stand toe-to-toe with them as one of the year’s best.

The increasingly ubiquitous (and deservedly so) Domhnall Gleeson stars as Caleb, a programmer at search engine giant Google Bluebook who wins a staff lottery to spend a week with the company’s reclusive founder, Nathan, played by the increasingly ubiquitous (and deservedly so) Oscar Isaac. However, on his arrival he learns he’s not just there to hang out: Nathan wants him to perform a Turing test on an AI he’s built. The point of the Turing test (as I’m sure you know) is for a human to interact with an AI but not realise it’s an AI, so Caleb’s surprised when said AI — Ava, played by the increasingly ubiquitous (and deservedly so) Alicia Vikander — comes in the form of a robot that’s obviously a robot. The real test is whether Caleb can know he’s talking to something non-human and still come to be convinced it’s human. As Caleb begins his interviews with Ava, it becomes apparent that there’s something else going on at this remote facility, where regular power cuts mean they’re all locked in…

As is probably clear, Ex Machina is a sci-fi movie of the thoughtful variety. It’s a film that considers ideas of artificial life, how we test it and what it means to create it, and only gradually builds in thriller elements that pay off in its final twenty-or-so minutes. 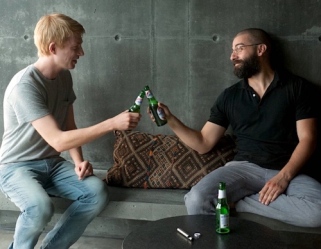 In truth, it’s not the most thorough deconstruction of what it means to be human and whether artificial intelligence can have that right, but it does touch on these issues and, in so doing, leaves them open for the viewer to mull over for themselves, or debate with friends, or however else one likes to consider their movies post-viewing (like, I dunno, writing about them on the internet or something).

There are thematic similarities to Blade Runner, which (in case you’ve not seen it) also deals with the humanity or otherwise of man-made intelligence. Mulling on that comparison, I’m tempted to say Ex Machina is almost the inverse of Blade Runner, in this regard: Ridley Scott’s classic is ostensibly an SF-noir thriller (Harrison Ford is a cop hunting down some rogue robots), but by its end has revealed a considered exploration of what it means to be human, and whether these artificial creatures can lay claim to that. Conversely, Alex Garland’s film seems like it’s sitting us down to consider those same issues, but is actually laying the groundwork for revelations and twists that build to an edge-of-your-seat climax. I’m not saying one’s better than the other in this respect, just that they’re approaching the same topics almost from opposite ends.

Also like Blade Runner, Ex Machina is an exceptionally well made and performed film. Not in the same way as Blade Runner — it’s bright and clean and modern, in a Google-y, Apple-y kind of way — but to a similar level of internal consistency and accomplishment. Gleeson’s Caleb may seem a little plain, a blank page for the other characters to write on, but as his insecurities begin to come to the fore you realise that’s almost the point. Isaac is suitably overbearing as the alcohol-dependent genius behind Bluebook and Ava, an initially affable but quickly disquieting presence — he may be a threat, or may just be a bit odd.

And his dance scene is surely one of 2015’s highlights (there’s an extended version hidden on the US Blu-ray, which is a treat). Garnering the most praise (and awards) is Alicia Vikander’s take on an AI. It’s a tricky role to tackle, because she’s not just a robot — that would defeat the point of Nathan’s exercise — but nor is she fully human. It’s a tightrope of a role, a fine line to walk, and Vikander negotiates it with aplomb. To say too much more would be to spoil it.

Aside from the acting, the film’s most striking element is surely the design of Ava. Her face and hands appear to be human, but everything else is robotic, and much of it transparent. This isn’t a case of slipping an actor into a suit painted with circuitboards — you can see the metal limbs and motors in her arms and legs, the metal spine in her back, the various computers or power sources or whatever glowing and spinning inside her. Occasionally she dresses in clothes and her workings are covered, but she spends most of the film with them on display. The CGI is literally flawless, which for a relatively-low-budget little British sci-fi-drama is all the more remarkable. I guess the visual effects awards are going to go to the big films, Star Wars or Mad Max or The Revenant (the bear seems to be very popular), but I do wonder if the work here is more deserving. You know how it must’ve been done — mo-cap suits and CGI — but there’s still a feeling of “how did they do that?”, because it’s so faultless. In fact, you don’t even wonder how they did it, because you just accept it; it’s only if you actively stop to consider it that you realise it’s physically impossible and must be CGI.

Those after a dissertation-like hard-science deconstruction of the meaning and possibilities of AI will likely find Ex Machina slightly lacking, as will anyone after the crash-bang thrills most mainstream sci-fi provides. Viewers prepared for a decently thought-provoking dramatic thriller about near-future tech, however, should be both engrossed, and grateful that movies like this are (for the time being) still getting made.

The British Academy Film Awards are tomorrow night, televised on BBC One from 9pm.

Ex Machina placed 20th on my list of The 20 Best Films I Saw For the First Time in 2016, which can be read in full here.