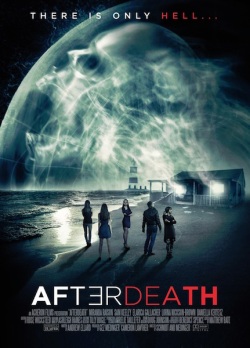 A woman wakes up on a beach in the middle of the night. Stumbling away, she comes across a beach house with three strangers inside. They establish that the last thing they remember was being in a nightclub when there was some kind of accident, and then they woke up here. Fortunately, they’re not stupid and quickly twig this place is some kind of afterlife, then begin to work out how to get out — not that they’re helped by the lighthouse beam which causes immense pain, or that if they run away from the house they end up back at the house, or the vicious smoke-monster that’s flying around…

A low-budget British single-location thriller with a mostly unknown cast (the lead is Miranda Raison, who you may recognise from Spooks, 24: Live Another Day, or even things that aren’t about spies), AfterDeath mainly trades on the mystery established by its situation. The characters are quickly sketched and somewhat archetypal, and the twists in their storylines aren’t all that surprising, but combined with the relatively brisk running time this means they crack on with trying to solve what’s going on. There are some familiar elements to this (the looping ‘world’), but also ideas fresh enough to keep it watchable.

Hampering that watchability is the ugly digital cinematography. There’s always the possibility this was affected by the fact I was watching via streaming, but I normally get next-best-thing-to-Blu-ray quality from Amazon Instant Video (where I watched this, obviously) so I’m inclined to think it’s just the shooting and grading choices of the filmmakers. The end result is frequently murky, making the film look like it was shot or finished on cheap equipment, exacerbating the low-budget feel in a negative way. 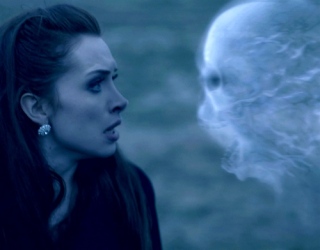 AfterDeath is billed in part as a horror, emphasised by the skull imagery used on the poster. It’s not particularly scary though, so if you’re after that kind of thrill then it’s one to miss. As single-location mysteries go, it’s not remarkably original or exceptionally engaging, but the story and its revelations are solidly executed and the whole is decently performed, providing you don’t strain your eyes trying to see what’s happening.

* The film doesn’t actually have a BBFC certificate, but the trailer is rated 18. ^