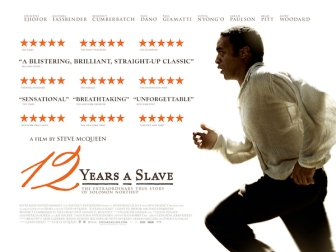 As we know, the Oscars are racist and always have been, especially recently. Like two years ago, when they didn’t give a load of nominations and several awards to a film about slavery from a black director and black screenwriter.

That film was, obviously, 12 Years a Slave, the true account of Solomon Northup (Chiwetel Ejiofor), a free black man who was kidnapped from his New York home and sold into slavery in the South. His story provides an overview, of sorts, of the experience of working as a plantation slave, both for a relatively decent master (Benedict Cumberbatch) and an evil SOB (Michael Fassbender).

One person who didn’t win an Oscar was Ejiofor (he lost to Matthew McConaughey, but he did win the BAFTA). His nomination was certainly deserved, though, because it’s an incredible lead performance — restrained most of the time, evoking Solomon’s internal life subtly rather than showily, but with carefully executed break-outs of emotion. Indeed, I’m slightly baffled by online commenters who felt the film was cold and lacking emotion or character. At the risk of getting on a high horse, I wonder if it was just too subtle for some? Ejiofor isn’t sat there tearing his heart out, but I thought there was considerably more to his performance than “looks happy in flashbacks, looks miserable in slavery”.

Nonetheless, the supporting performances are uniformly excellent, too. Paul Giamatti and Brad Pitt may be mere cameos, the presence of such actors highlighting their roles more than their function within the narrative does, but there are very strong turns from Cumberbatch, Paul Dano, Sarah Paulson, and in particular Oscar-winning Lupita Nyong’o,

who will break your heart, and Michael Fassbender, who is overdue the gong for his many varied and accomplished performances. (I doubt his forthcoming triple of X-Men 6, video game adaptation Assassin’s Creed, and prequel-sequel Alien: Covenant will do anything for him in that regard, but he’s not yet 40, and that’s the prime part of a man’s life for Oscar winning, apparently.)

Steve McQueen’s direction is classical but effective, rarely drawing attention to itself when it has more important things to convey. That’s not to sell it short, though. A scene in which Fassbender’s plantation owner forces Solomon to do something unthinkable is achieved in a single roaming take that lasts nearly five minutes; a tour de force of camerawork, performance, and behind-the-scenes choreography, which only serves to heighten the tension and horror of the experience by never cutting.

Unsurprisingly, 12 Years a Slave is not an easily digestible film — it’s about a disgusting part of human history, and doesn’t shy away from some of its horrors. That said, it’s watchable thanks to the top tier performances, consummate direction, and moving storytelling.

12 Years a Slave was viewed as part of my What Do You Mean You Haven’t Seen…? 2016 project, which you can read more about here.